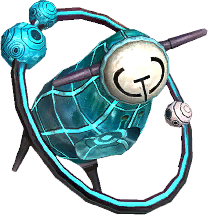 The Zwerg Droid is one of the types of Militarized Unit found in Final Fantasy XIII and Final Fantasy XIII-2. They are small bipedal, armless, bowling-pin-shaped robots found on Cocoon in the first game and Gran Pulse in the sequel. Rectangles or rings orbit the body, which is constructed so as to be pliable and bend and twist. Zwerg Droids are among the first creatures encountered in the second area of both games: the Pulse Vestige and Bresha Ruins 5 AF, respectively.

In Final Fantasy XIII-2, all Zwerg Droid Paradigm Pack allies are Ravagers, and have one of two Feral Links: Multicast is a magical attack, and Giant Drop a physical one. They share this pair of Feral Links with Spooks.

Most of the Droids have no outstanding qualities, but Koboldroid Yang has the third highest Strength among Ravager allies. However, there are only three enemies in the game resistant to Magic and weak to elements, making Ravagers who specialize in elemental strikes mostly unnecessary.