Zulkheim is a region of central Quon in Final Fantasy XI. It is key to the commerce of the Alliance of Altana due to its roads, which provide the most direct land route between the Republic of Bastok and the Kingdom of San d'Oria, and its port, which provides access to the Federation of Windurst in Mindartia. Zulkheim's status as the heart of the continent has made it a major historical battlefield. 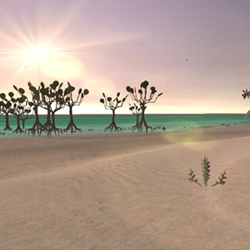 Valkurm Dunes is a sandy wasteland sandwiched between Konschtat Highlands in the south and La Theine Plateau in the north. In contrast to these neighboring highlands, Valkurm descends into the Sea of Zafmlug. The harbor town of Selbina lies at the center of the area and Gwynham Ironheart's monument to its establishment rests in an alcove nearby. The allied outpost for the Zulkheim region stands just outside the port.

Novice adventurers traditionally assembled in the dunes to undertake their first battles as members of a genuine party. Bastokans arrived from the south, San d'Orians entered from the north, and Windurstians were delivered from the sea. Many stories were told of their struggles to avoid patrolling Goblins and lizards long enough to join forces and unlock their Support Jobs. This process has eroded over time, however, and it has become more common to see adventurers working through this stage of their careers by themselves.

In addition to being a natural meeting point for travelers from the three nations, Valkurm also contains subtle connections to other lands. A concealed cave in the west leads into the Gustav Tunnel, through which one may return from distant Cape Teriggan. A swirling vortex hiding along the eastern beach carries errant visitors across the sea to Lufaise Meadows. More mysteriously, hieroglyphics near the outpost are linked to a shrouded version of the dunes in the dreamworld of Dynamis while a Cavernous Maw propels wayfarers to a permutation of the Misareaux Cost in the alternate reality of Abyssea. 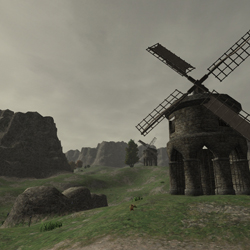 The Konschtat Highlands are windswept grasslands found north of Gustaberg. The narrow Aulgung Pass ushers travelers from the south to the area's vast, rolling hills. Konschtat's famed gales, nicknamed "Odin's Wrath", power the Bastokan windmills that dot the landscape. The use of these facilities to process San d'Orian grain is a vital point of cooperation between the neighboring nations.

Though already functioning as a crossroads between Gustaberg in the south, Derfland in the northeast, and the remainder of Zulkheim in the north, the importance of the highlands to wayfarers is further established by the presence of the Crag of Dem. This ancient structure features a telepoint that, once visited, allows an adventurer to transport directly to it by means of the Teleport-Dem spell.

The crag once boasted three functioning telepoints but recent events have caused one to shatter, revealing a path into Dem's Hall of Transference, and another to vanish altogether, leaving only a wispy dimensional portal in its place. Those who have seen Al'Taieu may use this phenomenon to revisit the northern outskirts of the Celestial Capital.

Other landmarks in Konschtat include a stone monument left at its center by Gwynham Ironheart, a famous explorer. The southern highlands also contain a Cavernous Maw which leads to another version of the area in the alternate reality of Abyssea.

The Gusgen Mines are an abandoned Mythril extraction operation in the eastern Konschtat Highlands. Though once prosperous, they were plagued by unsafe working conditions and became the site of several suspicious deaths. Having been largely depleted and replaced by the newer Palborough Mines, Gusgen has fallen into disrepair. It crawls with the spirits of the men, women, and children lost to its depths over the years.

Though many of these are harmless visions, the skeletons and other foul creatures wandering the tunnels pose a grave threat to careless visitors. Among these are six notorious ghosts that dwell in Gusgen's stagnant waters and rise in response to the work siren that still echoes through the mines.

Passage through Gusgen is inconvenienced by sets of doors operated by levers. A separate path to Oldton Movalpolos lies not far from the entrance to the mines. 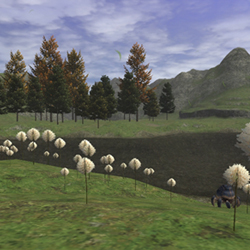 The La Theine Plateau is a tranquil grassland bridging the harsh dunes of the south with the forests of Ronfaure in the north and Jugner in the east. Though once reputed for its chocobo population, the plateau has been overrun by sheep as a result of San d'Orian herding. The land is scarred by several deep, linear crevices whose subterranean links form the outer limits of Ordelle's Caves.

The Crag of Holla towers over eastern La Theine. Having touched its telepoint, one may return to it by means of the Teleport-Holla spell. Like similar ancient structures, Holla once featured two additional telepoints that have been recently destroyed. The first of these shattered and created a path into the local Hall of Transference. The second disappeared completely and left a glowing dimensional portal on its platform. This provides convenient access to northern Al'Taieu for those who have previously visited its forgotten terrain.

Other points of interest along the plateau include the last monument erected by Gwynham Ironheart before his ill-fated journey to Valdeaunia. Carbuncle also inhabits a stone circle along the northern border of the area. A rainbow appears over the Crag of Holla when prospective summoners meet this avatar to begin their journeys. In addition, a Cavernous Maw near Ronfaure connects to another La Theine in the alternate reality of Abyssea.

Ordelle's Caves are the vast tunnels coursing through the La Theine Plateau. They are named for Lord Ordelle, the Elvaan explorer who discovered them. In earlier times the caves had been known as the "Shrine of Endless Travels". The area's diverse inhabitants include bats, Crabs, Rabbits, and morbols. 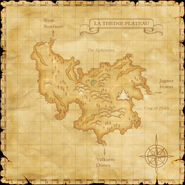