Zuh is a monster from Final Fantasy Mystic Quest and the reincarnation of Pazuzu. It guards the sixth floor of Doom Castle directly below the summit. Unlike the other three reincarnations of the Vile Four, Zuh has less HP than Pazuzu (20,000 versus 25,000). It enters battle with Chimera and a Thanatos.

PsychShield is still dangerous as it reflects magic, but Zuh may use PsychShield on the party to no apparent effect but minimal damage - it will not reflect spells cast on either the party or on Zuh. Its attacks are also strong, including Doom Dance which inflicts Fatal on a character. With Doom Dance and PsychShield, Zuh is arguably the hardest boss of the game.

Unlike the rest of the Vile Four, their reincarnations, or the Dark King, Zuh has only three phases to the battle, depending on how much HP it has left.

The first phase has Zuh in a battle-ready pose, his beak open, and with his arms readied. After losing a third of its health, Zuh appears fatigued. After losing two thirds of his health, Zuh lies on the ground, using his left elbow to prop himself up, and his eyes glow green. 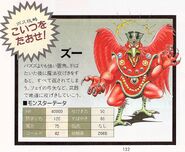