Great people here! You can trust everything they say!

Zozo is a town in Final Fantasy VI. It is a den of thieves and criminals constantly caught in a downpour of rain. Unlike most other towns in the game, while traveling Zozo the player can be attacked by randomly-encountered enemies, the greedy and violent denizens of the town.

Zozo was founded by the lower-class citizens of Jidoor to the south, who left town and built their own. Zozo and its residents have a poor reputation among the citizens of Jidoor, as the people of Zozo regularly drift back into Jidoor looking for work and marks to steal from.

The party arrives at Zozo searching for Terra and find her atop the tallest tower where she is being cared for by Ramuh, who tells them the history of the relationship between espers and humans. Ramuh asks the party to rescue the espers being experimented on within the Magitek Research Facility, and believes one of them could help Terra accept her nature and learn to control her power. Celes volunteers to go since she is familiar with the Empire, and Locke volunteers to accompany her.

When the party returns from the Magitek Research Facility, one of the magicites they retrieved glows and reacts to Terra, and Terra recognizes it as her father, Maduin. Through a flashback, it is shown how Terra's mother Madeline met Maduin and gave birth to Terra. When the Empire invaded the Esper World, Maduin and Madeline were blown out along with Emperor Gestahl and his soldiers, and Gestahl struck down Madeline and took a number of espers captive to experiment on them. With Terra's past known to her, she becomes able to control her transformation and rejoins the party.

In the World of Ruin, during his travels, Cyan learns of a young woman named Lola in Maranda, who wonders about her boyfriend, a wounded soldier that was being cared for in Mobliz. Stirred by her story, Cyan begins writing letters to her, pretending he is her boyfriend and is rebuilding Mobliz. Cyan has come to reside in Mt. Zozo and sends his letters by carrier pigeon. After the party raises the Falcon, one of his pigeons flies by the airship and Celes feels an urge to follow it.

After learning from Lola about the letters from her "boyfriend" and suspicious of who is sending them, the party attaches Lola's reply to a pigeon and follow it to Zozo. The man wandering outside the "Inn" building sells them Rust-Rid for 1000 gil, allowing them to dissolve the rust on the door above the "Cafe" sign, revealing a path to Mt. Zozo.

Zozo is surrounded by mountains on all sides, with a narrow passage to the east providing entry. Likely due to this small area to build in, Zozo's residents have built up instead, creating structures more like modern skyscrapers than the modest houses seen in the rest of the world. The buildings are traversed by a mixture of interior and exterior stairwells, and some houses built into the mountains are supported by steel girders. One such building, the pub, has a passage that connects to a cave system in Mt. Zozo.

Signs indicating typical town businesses, like an inn, pub, and shops, are on the exteriors of various buildings, but no one in town actually offers these services, and the purported "Inn" is merely a single room with a clock on a central pillar, with no beds or counter to do business from. As some buildings do contain NPCs behind counters, it is plausible that Zozo does have shops, but their owners quietly refuse to do business with the party. In the Pixel Remaster port, the town is emphasized to be poorly maintained, with broken and missing windows in many buildings and the signs advertising business spark and flicker. Several walls are defaced with graffiti and eerie purple lighting comes from the windows and balconies of various rooms.

Encounters remain the same in the World of Ruin.

At the top of the "Cafe" is a room with a chest containing an Ether, and in the far north-west corner of town inside the "Armor" shop is a Potion.

Climbing the central tower, past where the party must leap between buildings is a small room containing a Brigand's Glove. In the adjacent building that is leapt to, the pots in the back contain a Hi-Potion and an Ether. A room below where Dadaluma is fought contains a Burning Fist, and finally, the room atop the tower where the party finds Terra contains an X-Potion and Hermes Sandals.

By setting the clock to the proper time in the "Inn" building, the player can find a rare Tool, the Chainsaw.

After finding Terra, the player can find the magicites Ramuh, Kirin, Siren, and Cait Sith in the room. Ramuh must be taken for the story to advance, but the other three can be avoided if the player wishes.

In the World of Ruin, the man wandering out the "Inn" building, the only citizen in town who is truthful and helpful, will sell the party the key item Rust-Rid for 1,000 gil. Rust-Rid is needed to open the door leading to Mt. Zozo.

The party first comes to Zozo seeking to find Terra after she transforms into an esper-like form at Narshe. The NPC at the counter at the base of the "Relic" shop clues them in that Terra is at the top of the building.

The path up the tower is linear until the player comes to an apparent dead end where the outside passage is blocked and the last room only contains a treasure chest. To progress, the party must enter the empty doorway here and walk to the left, and they will climb onto the balcony and leap across to the adjacent building. Here they can climb up a few more stories and then cross back to the main building to continue up. At the top, Dadaluma will block the way and must be defeated to progress.

In the room at the top of the tower, speaking to Terra initiates a cutscene and gives the party a new objective.

The clock puzzle and obtaining the Chainsaw.

The door marked with the "Inn" sign contains a stopped clock and the player is prompted to set the hands to the proper time. The player can discover clues to the correct time by speaking to everyone in town. Since everyone in Zozo lies except for the man just outside the Inn, they will tell the player what time it is not, and by process of elimination the player can narrow down the correct time to only two options, 6:10:10 and 6:10:50. The correct time is 6:10:50. Setting the hands to the right time reveals a secret staircase atop which lies the Chainsaw, one of Edgar's strongest Tools.

The player does not need to actually speak to every NPC in town to input the correct time, so the Chainsaw can be acquired as soon as the player enters Zozo.

After the player has been to Maranda and watched the carrier pigeon from Lola come to Zozo, the man outside the "Inn" will sell the player Rust-Rid for 1,000 gil. With this item in hand, the rusted door atop the "Cafe" can be opened and the party can enter Mt. Zozo, where Cyan can be re-recruited. 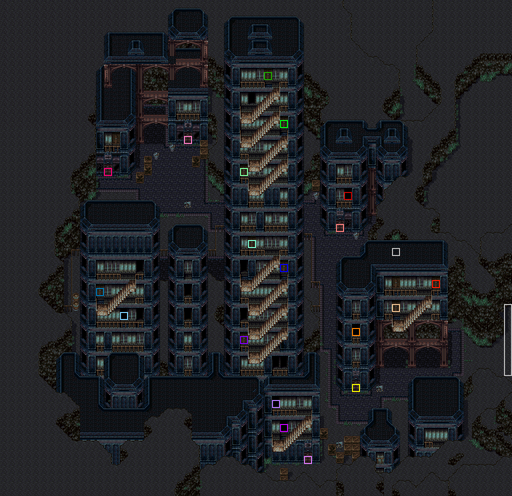 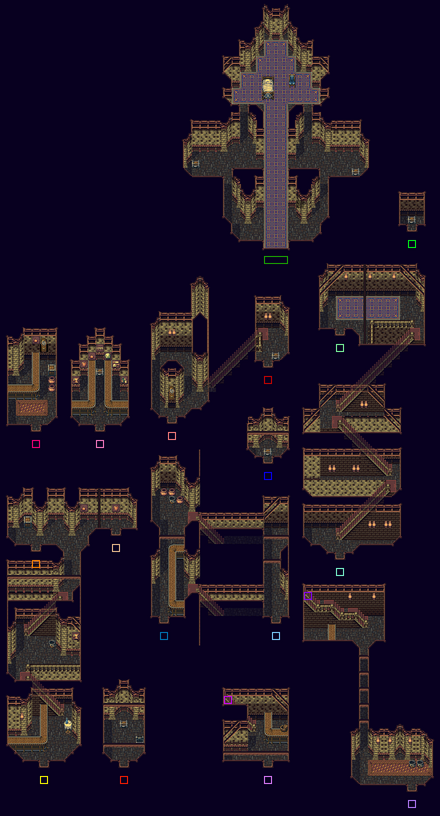 The theme that plays while in Zozo is "Slam Shuffle."

It bears a similarity to Henry Mancini's "Pink Panther" theme.

Zozo appears as the setting for a regular dungeon and is also featured in the Challenge Events Legendary Plunder and Touched by Magic.

Following word that Terra has been seen, the party goes from village to village looking for her. They eventually reach the town of Zozo, an impoverished hotbed of scum and villainy. 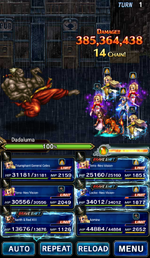 In all versions, the unreachable man that jumps between buildings actually has a line, but it is the same line used by the man standing on the western most building: "The seconds? They're divisible by 20!"

When speaking to Ramuh, different party members may have unique dialogue depending on the player's active party and the point of the conversation. Even Shadow has a line reacting to Ramuh's sacrifice. However, only one such unique dialogue can be triggered each time, so the player cannot view all the lines on the same playthrough.

Unused dialogue exists for an NPC directly mentioning Terra's presence and the party reacting. As only the man outside the "Inn" tells the truth, it is unknown if this dialogue was meant for him, or for another NPC that was removed.

The description of Zozo in Final Fantasy Record Keeper is very similar to how Mos Eisley is described by Ben Kenobi in Star Wars Episode IV: A New Hope. The term "scum and villainy" is even used in both descriptions. 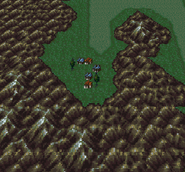 Zozo on the World of Balance map (SNES). 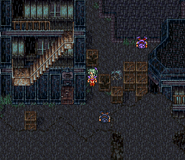 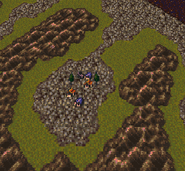 Zozo on the World of Ruin map (SNES).

[view · edit · purge]Zozo is the Ouija demonic entity who has been documented since the early 1800s. This alleged demon is said to attach itself to certain unlucky individuals who venture into its domain. Some claim Zozo will go to any length to trick its naive callers.