The Zone Eater's Belly is a location in Final Fantasy VI. It is a secret dungeon that can only be accessed by allowing a Zone Eater on Triangle Island to swallow the entire party. It contains many rare treasures and is the home of the optional character, Gogo.

The belly is a series of unique traps and challenges that must be surpassed if Gogo is to be found. The first area consists of bridges spanning a forge, patrolled by mysterious figures in green. The party must leap between bridges while avoiding the figures; if the figures reach them, the party is knocked off and must climb back up near the start.

The next area has a collapsing ceiling; the party must take shelter in spots where there are gaps in the ceiling, or else they are crushed and it is an instant Game Over.

The final area is a series of collapsed bridges connected by treasure chests on stalagmites, which the party must hop on to cross and reach the door to Gogo's room.

At the start of the area is a beam of light that warps the party back to the surface.

Falling off the bridges in the first room lands the party in an area with two chests containing a Hi-Ether and a Red Jacket. The chests on the bridges contain a Magical Brush and Genji Armor, and a chest on a ledge at the end of the area contains a Fake Moustache.

In the room with the collapsing ceiling, the chests contain a Hero's Ring, Zephyr Cloak, and Pinwheel. Finally, in the room just before Gogo, the chest contains a Thunder Shield.

In the first room with bridges, let the figures knock the party off to get the chests below, then carefully move across them to the left. The chest on the ledge is reached by leaping off the edge of the bridge. In the room with the collapsing ceiling, it is best to play it safe and move from one safe spot to the next and then let the ceiling come down before moving on.

The final room has a bit of a trick to getting the final chest. When preparing to leap across the last chest to reach the bridge to the door, face down and jump to reach the button on the ledge, which makes two new jumping points appear - the party can now jump back to the start of the room and go all the way left to get to the chest.

The green-hightlighted areas are safe spots from the collapsing ceiling.

"Gogo" is the background theme that plays inside the Zone Eater. It is the theme of the dungeon, as well as Gogo's theme.

An urban legend was that Gogo and the Zone Eater's Belly were references to the American politician Adlai Stevenson. The theory claimed that Gogo and the Zone Eater's Belly allude to things Stevenson said or wrote, such as a passage in one of his books where he compared legislating to "jumping from one rickety bridge to another, with blind men running back and forth trying to push you off", which is what players must do in a room in the Zone Eater's Belly. The theory has been traced back to a Final Fantasy fan forum and a poster that started the rumor in 2001 as a joke, and all of the quotations the theory attributes to Stevenson are made up.[1]

Inside the Zone Eater (GBA). 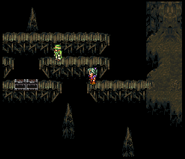