An Esper of unknown origin. Makes a Shell to protect the party.

Zona Seeker, also known as Zoneseek, is an esper in Final Fantasy VI who can be acquired as a magicite.

Zona Seeker is a brown, red and black floating creature. Its body is mostly skeletal and has no legs, while it appears to also wear a cape.

How it ended in the auction house is unknown; however, Zona Seeker's sprite is among those that can be seen leaving the Esper World when Terra Branford approaches the Sealed Gate.

Zona Seeker is bought for 10,000 gil in the Auction House in Jidoor once the magicite system is available.

Zona Seeker costs 30 MP to summon and casts Magic Shield (called Wall in the SNES and PlayStation versions) that grants Shell to the party. At level up it provides a +2 boost to Magic.

Zona Seeker is a rather useful magicite for the first half of the game, as many bosses rely prominently on magic and it is quicker and more efficient to summon Zona Seeker than cast Shell on each character. In the later game it is rendered obsolete by Strago's Mighty Guard, which grants the party both Shell and Protect.

Zona Seeker teaches two important spells at fast learn rates, so party members can equip it for only a couple battles to learn them. It also teaches Shell the fastest of any esper the party can obtain for much of the game; only Alexander teaches it faster. 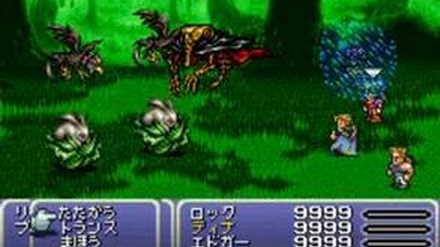