Defeated as a boss, then license purchased on License Board (costs 200 LP)

Strongest of the scions created by the gods, they feared his growth, and so kept him a child. So indomitable is his strength that all things are by him twisted and pressed into oblivion. He alone fashions the laws governing all things, and administers punishment in place of the gods. So is he Keeper of Precepts, and his authority is absolute.

Zodiark, Keeper of Precepts is an optional level three Esper in Final Fantasy XII. He dwells in the Henne Mines in the hidden Special Charter Dig area.

His license costs 200 LP, and he requires three Mist Charges to summon.

Zodiark is unlocked in the Sky Pirate's Den in the Clan Primer by defeating him, earning the title Zodiac Knight.

The Esper of Dark, Zodiark represents the zodiac sign of Ophiuchus, the Serpent Holder. Zodiark is indeed a serpent, in the form that Ophiuchus is most commonly associated with: a snake. From his power of Dark, his color sign is black. Zodiark is also referred to as the Ashlesha Ascendant, which is the Sanskrit name of its zodiac sign as used in Jyotish (Hindu) astrology.

Zodiark is based on a secret summon in Final Fantasy Tactics, associated with the thirteenth auralith. Zodiark returns in Final Fantasy XII: Revenant Wings in its second form as a non-elemental ranged Rank III summon. His twelve wings may be a reference to the 12 Espers corresponding to the horoscope signs.

As the Immobilize glitch requires the party leader to be a decent distance away from the rest of the party, the trek will still be difficult. Fleeing is not suggested, as certain enemies can transport to the space in front of a character, and if there are many teleporting enemies the player's path may become blocked. Without a correctly trained party, the trek to Zodiark can be harder than the Esper itself.

When found, Zodiark is fought as a boss, and once defeated, his license can be purchased for 200 LP.

During the boss fight, of the items the player can steal from Zodiark is the rare Serpentarius gem needed in making the Tournesol weapon.

Esper licenses sometimes unlock licenses that could not otherwise be reached. Zodiark's license will appear on all boards, but once chosen by a character, will disappear from the other boards. In The Zodiac Age version, the player can choose two license boards for each playable character, and activated licenses are activated on both boards if present.

Zodiark allows access to the following licenses on these boards: 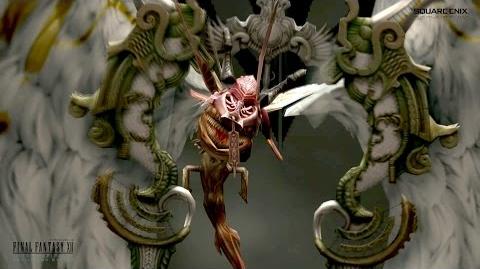 A non-elemental attack and Zodiark's ultimate attack. In an eclipse, Zodiark falls into a calm sea. An egg rises to the surface, and Zodiark hatches to reveal his second form, a serpent with vast, feathered wings. Folding his wings around his body, he draws energy from his surroundings and spreads his wings wide, filling them with power and obliterating his surroundings. As he flies off into space, with the energy of the eclipse charged in his body, Zodiark flies to the targeted enemy, and destroys the fabric of reality itself in a catastrophic explosion.

Final Eclipse deals 50,000 base damage (60,000 in the Zodiac versions), making it one of the most powerful attacks. Enemies with the Reduce Damage augment, such as Yiazmat, will instead take 35,000 damage (or 42,000 damage). Unlike most other Esper attacks, Final Eclipse is unaffected by Reverse.

Zodiark is fought in the special dig site of the Henne Mines and also fought in Stage 97 of the Trial Mode in the Zodiac versions. His special move is Darkja, a powerful Dark-elemental cinematic attack that has a chance to instantly KO a target, and can inflict Blind on a character even if he or she is KO'd. He starts the battle with Reflect, Protect, Shell, and Haste. Zodiark's Banish Ray usually inflicts 9,999 damage. At half HP Zodiark erects a Magick Wall, making him immune to magick attacks for two minutes. At quarter health Zodiark begins using Shift to change his elemental weakness. When Zodiark's HP is HP Critical, his attacks grow stronger and faster and Darkja is used more often. When his HP is almost gone. Zodiark's Battle Cry will make his attack stronger. Once Zodiark puts up the physical paling, physical attacks will be useless from then on, as Zodiark will only erect it again as soon as it falls.

Zodiark could be an amalgam of words zodiac and ark.

Zodiark is also referred to as the Ashlesha Ascendant, which is the Sanskrit name of its zodiac sign as used in Jyotish (Hindu) astrology.

Zodiark was formerly known as Serpentarius. The rare gem, which can be stolen from Zodiark, refers to this.

Zodiark's second form—that of a snake with feathered wings—may be loosely based on the Aztec god Quetzalcoatl, who is represented as a feathered snake. Also, in some legends, Quetzalcoatl is related to the Sun and is tasked with the creation of mankind. This seems to oppose Zodiark, who is adept at destruction.

Zodiark also resembles archaic depictions of Seraphim in that it is a serpent with many wings, although Seraphim conventionally only have six. Six-winged beings are prevalent throughout the series, including Kefka Palazzo's final form, and Garuda, and Siren from Final Fantasy XIV.