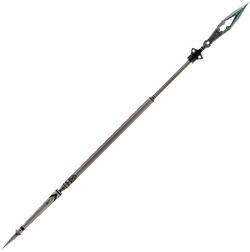 A spear from the distant world of Ivalice. An incredibly long spear of simple design that must be handled with two hands, regardless of the physical strength of the wielder. This spear is said to be so rare and so difficult to obtain in its world of origin that many believed it to be a mere myth.

The Zodiac Spear (最強の矛, Saikyou no Hoko?, lit. Strongest Halberd) is a recurring spear in the Final Fantasy series being usually depicted as the strongest one in games in which it appears.

The Zodiac Spear is the most powerful weapon available in the original version, where its license is found in the bottom right of the License Board, just above Masamune. While being the strongest weapon available, it can be found fairly early—provided certain chests are not opened. It costs 235 License Points, and has an Attack power of 150.

Like all spears, Zodiac Spear grants the user +8 to evasion and has 4% chance of performing hit combos. Spears are among the faster weapons with 2.14s charge and 1.2s action time, second only to daggers and ninja swords.

In the Zodiac versions it provides 141 Attack, 8 Evade, Charge Time of 28, 4% Combo Rate, has a 20% chance of inflicting Disable on a target, and requires the Zodiac Spear license for 240 LP.

The player no longer needs to beware of opening forbidden chests, as the concept was removed. There is no longer a Zodiac Spear to be found at Necrohol of Nabudis, but it can still be acquired via different means. It can be found as a treasure in the Henne Mines Special Charter Shaft. The chest spawns 1% of the time, but once it does, it will always contain the spear. The chest also respawns.

It can also be acquired through the Hunt Club sidequest by giving 10 trophies each to the bangaa brothers Atak, Blok, and Stok and buying it, together with the Zodiac Escutcheon, for 999,999 gil. Alternately, if the player gives more than 15 trophies to Atak, Atak will reward the player with the Zodiac Spear.

The Zodiac Spear is the strongest spear. It has an attack of 22 and can be randomly found in the chest on the 90F inside Moonsand Ruins, Holy Tree Tower, Mysterious Lighthouse, and Trial Tower.

While in his EX Mode, Vaan wields the Zodiac Spear for his spear attack.

Zodiac Spear is a Spear obtained during the Final Fantasy XII event, Henne Mines. It provides 130 ATK, Accuracy +50%, has a damage range of 100-160%, and requires both hands to wield. 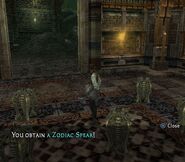 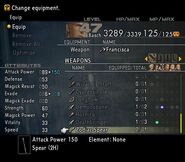 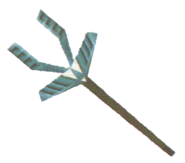 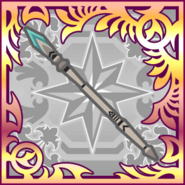 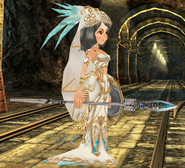 In Final Fantasy XII the zodiac equipment pieces' original names are 最強の矛, "Strongest Spear", for Zodiac Spear and 最強の盾, "Strongest Shield", for Zodiac Escutcheon, referring the Chinese idiom 自相矛盾 and the story behind it from the philosopher Han Feizi in his eponymous book of a man selling weapons. To convince people to buy his shield and spear he claimed them to be the sturdiest shield nothing could pierce and the sharpest spear able to pierce through everything. Someone asked what would happen if they tried to pierce the seller's shield with the seller's spear and the man couldn't answer, picked up his shield and his spear and left. Thus, the idiom 自相矛盾 means "to be self-contradictory" and the shortened term "矛盾" (lit. Spear-Shield) is used in Mandarin Chinese to mean "Contradiction".

The localized name, Zodiac Spear, refers to the zodiac, a recurring theme in Final Fantasy XII, it being the twelfth installment to the series and associated with with the twelve zodiac signs.