Zirconiade (ジルコニアエイド, Jirukoniaeido?) is the final boss of Before Crisis -Final Fantasy VII-. A so-called "Ultimate Summon" also called the "World Burner", Zirconiade's pyramid-shaped summon materia is so powerful it needs four support materia to be fully summoned into the world, which were hidden around the planet long ago.

Fuhito, Avalanche's demented scientist and former apprentice to Bugenhagen, seeks the support materia. He plans to summon Zirconiade to eradicate all life on the planet, returning all the world's spiritual energy to the lifestream so the planet could heal from the influence of the Shinra Electric Power Company.

At an unspecified point prior to Before Crisis, Professor Hojo, desiring to test the applications for grafting materia onto human flesh, implanted Zirconiade's materia into the hand of Felicia. She was a young girl who had been taken from the ruins of Kalm, which had then recently been bombed by Verdot and the Turks. Though the procedure was successful, Zirconiade could not be called because the support materia were not present, so Hojo misjudged Felicia a failure who was unable to use the materia and ordered her to be disposed of.

An amnesiac Felicia survived and wandered the planet, eventually being taken in by Avalanche and made their leader, taking the name Elfe. Though the implantation of Zirconiade enhances Elfe's physical abilities, it drains her life force in an effort to gather the energy to manifest itself.

Several years later, Fuhito and Avalanche begin seeking the four support materia needed to use Zirconiade's materia. Verdot, dismissed from his position due to being suspected of treason, discovers Elfe is Felicia. He believes that if the Zirconiade materia is united with the support materia, the materia embedded in Elfe will stop draining her life. Fuhito betrays Shears, Elfe's second-in-command, who begins to work with Verdot to find the materia wanting to protect Elfe. Discovering Verdot and Elfe's pasts and rejecting their orders to assassinate Verdot, the Turks defect from Shinra, cooperating with Verdot and Shears to find the support materia before Fuhito.

In Corel Shears finds the first support materia in the town's mako reactor when the Turks arrive to protect the town from Avalanche. The reactor collapsing, Shears entrusts the materia to the player's Turk as they flee the reactor. The second support materia is found in Gongaga's reactor with the aid of Reeve and Cait Sith. The third support materia is found in Shinra Manor with the aid of Vincent Valentine. The final materia is located at Corel Prison, and is seized by the Turks, but in the process Shinra executive Scarlet captures Verdot. Fuhito has taken the president's son captive, Rufus Shinra, who was secretly aiding the Turks, and President Shinra plans to exchange Verdot for Rufus.

The Turks head to Midgar to rescue Verdot. Fuhito and Avalanche invade the city to track down the Turks and seize the support materia. Using Elena as a hostage, Avalanche claims the Turks' support materia while they were given to Shears for safekeeping. On the highways out of Midgar, the Turks find Fuhito and Avalanche amid the process of summoning Zirconiade. The summoning is incomplete because Zirconiade needs more energy. As the player Turk and Fuhito fight, the five materia pieces react to each other, the materia in Elfe removing itself from her body, and the five materia shards fuse. Fuhito seizes the complete summoning materia and rushes to the site of Zirconiade's summoning.

The Turks pursue Fuhito into Midgar as he attempts to get to the site of Zirconiade's appearance. Fuhito inserts the complete Zirconiade materia into his own body and offers himself as a sacrifice to complete the summon. Zirconiade's power transforms Fuhito, the player's Turk defeats him, Shears intercepting Fuhito's final attack on the Turk. Though Fuhito dies, Zirconiade manifests and the Turks head to fight it, battling monsters spawned by Zirconiade that invade Midgar. Transported into a pocket dimension, the Turks destroy Zirconiade by unleashing a Limit Break, saving the planet.

Though Zirconiade is destroyed, its summoning had an unexpected side effect. Sensing a threat, the planet reacted to Zirconiade's summoning by releasing a Weapon, Jade Weapon, to destroy it. With Zirconiade destroyed by the Turks, Jade Weapon begins hunting them, judging the Turks too powerful to be left unchecked.

Zirconiade is fought as the final boss.

The final battle with Zirconiade features the Turks taking turns battling it before finally finishing it off. This concept is reused for the final battle of Final Fantasy Type-0, where the members of Class Zero work together one-by-one to defeat the Rursan Arbiter. Both games were directed by Hajime Tabata.

The Player Turks embark on Zirconiade. 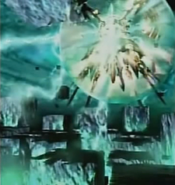