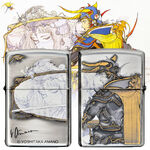 As part of a Yoshitaka Amano series, a Zippo lighter with artwork of the Warrior of Light and Princess Sarah was released on August 31, 2016.[1]

The official Final Fantasy VII Zippo lighters are each limited to 3,000 pieces, and the individual serial numbers are carved on the back of the lighters along with the symbol seen on the background during the game's introductory credits. There are ten different Final Fantasy VII Zippo lighters, of which five are of lighter in color and the other five darker. The pale silver lighters have the character's name written on the lighter in black; in the darker lighters the character's name is in the lighter's base color.

The lighters were released at 1997 with retail price of 9,000 yen. Characters available are:

The "Cloudy Wolf" Zippo depicts Cloud's Fenrir wolf emblem. It has the wolf's bust in the corner, and the emblem carved onto the lighter's surface. The lighter was released in 2005 and is limited to 3,000 pieces although there's no serial number to confirm its validity.

The Dirge of Cerberus -Final Fantasy VII- Zippo lighter is red with the Cerberus emblem in black embossed on the lighter's surface. The original retail price of the Zippo lighter was 11,550 yen. The lighter has a brass finish.

Another Final Fantasy VIII Zippo has the SeeD organization's logo on the front of the lighter, and the ornamental wing design seen in the game's "The End" screen with text: Final Fantasy VIII. It includes a metallic container padded with blue material. This Zippo is extremely rare, with only 400 ever produced back in 1999.

Rinoa Heartilly and Squall Leonhart Zippo also exists, with their name, profile and text "FFVIII" carved on it, along with some text.

The official Jecht Zippo has the Zanarkand Abes logo embossed on the lighter, along with the following lines of text[sic]: Jecht, once a talented Blits-Ball player, becomes a legendary "guard" along with Braska later on.. The Zippo was limited to 3,000 pieces and its original retail price was 11,000 yen.

The Final Fantasy X-2 "Yuna" Zippo Lighter represents the Gullwings with the wing of a seagull embossed on the lighter. The chain is made of .925 silver, and the Zippo of polished steel. The Zippo is limited to 3,000 pieces and its original retail price was 15,000 yen.

The official Final Fantasy XII "Judge" Zippo has the seal of the Archadian Empire embossed on it. It's made of polished steel and its original recommended retail price was 12,000 yen.

The Final Fantasy XIII "l'Cie" Zippo has the Pulse fal'Cie's symbol on it, the same that the fal'Cie's l'Cie are marked with in the game. Its original retail price was 13,650 yen.

The Vagrant Story zippo has a strap. The original retail price was 15,000 yen.[2][3] It depicts the Blood-Sin, the inverted form of the Kildean Rood. In its Kildean form it was a tattoo on the priestess Müllenkamp. The inverted form is used by Sydney Losstarot, who has it tattooed on his back. The Iocus priesthood used the rood as their holy symbol. During the inquisitions led by the priesthood, they would brand heretics with the rood turned inverse (the "blade" facing down), and this symbol came to be known as the Blood-Sin. Even after the destruction of Lea Monde, Mullenkamp's legacy lived on in the form of the "Key" to Lea Monde's power, granting control over the Dark. The Blood-Sin was the physical symbol of this key.

Retrieved from "https://finalfantasy.fandom.com/wiki/Zippo?oldid=3213494"
Community content is available under CC-BY-SA unless otherwise noted.