Zidane's default player name is Nameless Brigand, and his manikin counterpart has been renamed Bandit's Caprice.

Zidane's default costume is "Tantalus Brigand", based on his original appearance in Final Fantasy IX. His Trance form remains the same as in previous Dissidia games. The first alternate coloration colors his clothes similarly to his "Navy Gilet" attire from previous Dissidia titles, but more black than purple. The second coloration recolors his clothing a mix of khaki and olive green with tan boots.

Zidane's second alternate costume is "Soldier of Fortune", an updated version of his "Marcus's Cloak" from Dissidia 012. Zidane has a black mask worn over the right side of his face, obscuring his eye, and has a protrusion upon the hood in the shape of a crescent moon. Its first alternate coloration recolors his cloak a bright tan and his garments beneath the cloak brown, while the second recolors his cloak white and his garments beneath the cloak bright blue. His Trance form in this outfit has white fur and green eyes, based on his Trance form in his Marcus's Cloak outfit in Dissidia 012. 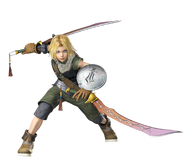 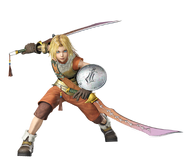 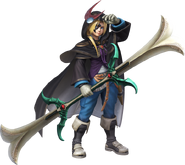 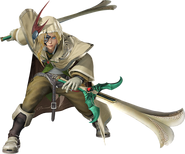 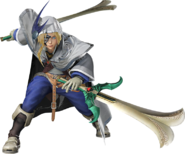 Zidane equips daggers, which can combine to become thief swords. All of his weapons are equipped by him in Final Fantasy IX.

Materia summons Zidane to World B as one of her champions. He appears before Firion and Cecil, and the three head to the goddess's domain together. At Materia's tower, Zidane and the other champions are informed that they must fight each other to produce energy to sustain the existence of this world. After their meeting is interrupted by Spiritus, Materia orders her champions to fight his forces.

Outside the tower, Zidane shares his concern with Terra and Lightning about how Materia seems to know little about her champions, or this world. They set off with Squall to seek the guidance of the resident Eidolons. After locating one, Terra senses the presence of a second one closer. Watching as Squall departs alone, Zidane worries him going off by himself, but Lightning agrees to accompany him, leaving Zidane and Terra to pursue the second Eidolon. Zidane, happy to spend some time with her, accompanies Terra to the Cornelia gateway where they find Ramuh with the help of the moogles. They learn that both Materia and Spiritus were born from Cosmos's will to keep this world from fading from the threat of the planesgorgers, , and agrees to aid them if they can best him in battle. Zidane and Terra prove their strength, gaining his summon crystal as their prize, and press forward in search of more summons.

The three soon pass through the Alexandria gateway, where they encounter a hostile Alexander,despite Terra's assurances they aren't here to harm him. When Kuja states it was a mistake for him to appear before the summon, Zidane reminds Kuja it is not the same Alexander he destroyed on Gaia, much to Terra's confusion. After they prove their worth to Alexander, Zidane thanks Kuja for his help, though the latter casually dismisses it. When the planesgorgers to descend upon the gateway, Kuja parts ways with them, and Zidane and Terra leave to rejoin Lightning and Squall. They also meet up with the Onion Knight, Vaan, and Y'shtola, who inform them further about the planesgorgers' presence. Zidane reveals the knowledge gained from Ramuh, and all of them return to Materia's domain.

Once Materia and Spiritus come to a truce, Zidane joins the rest of the champions to defeat Shinryu, the source of planesgorgers that threatens to eradicate the world. Before their staged battle to lure Shinryu out, Zidane suggests they meet up again "once things calm down," and Kuja nods in agreement and flashes a smile at him. As the final clash takes place, Zidane and the Onion Knight face off against Exdeath, but are caught off guard and find themselves in one of the Emperor's traps. They are rescued by Firion, allowing them to continue their assault. Once the battle energy summons Shinryu, Zidane participates in a joint attack against the dragon, but is repelled as Shinryu reveals his true form in a potent burst of power. Once the warriors regain their composure, they work together to defeat Shinryu.

After Shinryu is defeated, allowing Zidane and the other to return to their respective homeworlds. Prior to departing, Zidane leaves behind a crystal imbued with his essence, for Materia to use in his place.

Type: Assassin - With airborne attacks that track high and low, Zidane is the perfect hit-and-run character. His Steal ability raises his attack potency, defense, and movement speed while lowering those of his target.

Zidane specializes in swift attacks that cover vertical ranges and can easily set up for combo attacks. His gimmick is Steal, his Dash Bravery attack that inflicts a weak debuff to his target's attack, defense, and speed, and grants Zidane a buff in the same attributes. After successfully Stealing twice, or landing Mug once, Zidane will gain the Mark of Thievery buff, which allows him to charge his HP attacks for greater power, and his HP attacks will inflict a debuff that temporarily halts the cooldown of the target's EX Skills. Though his attacks cover vertical range, Zidane lacks attacks with horizontal range, and his damage is low.

Unused textures for Zidane's Trance form exist in the game, one with purple fur and the other with green fur. The purple fur is taken from Zidane's EX Mode in Dissidia 012 while in his Knight of Pluto outfit. These textures are associated with Zidane's 1-B and 1-C outfits, implying that at an earlier point in development each of Zidane's color variants would have had a uniquely colored Trance form as well. In the final product, Zidane's Trance form is different colors in each of his outfits but does not change color between their color variations. Terra possess similarly unused alternate Trance forms as well. 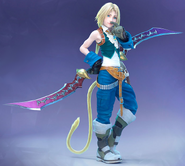 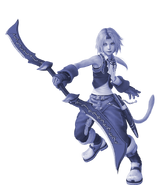 Zidane in the Arcade version.

Zidane from the arcade tutorial. 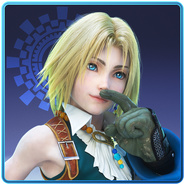 Zidane alongside the other 14 main characters. 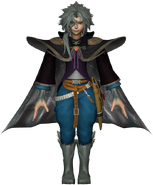 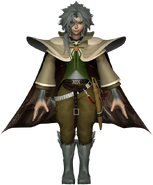 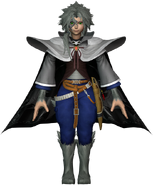 Unused texture of Zidane's Trance form in his 1-B outfit.