An active and cheerful thief, Zidane exhibits fondness for women and is easily elated. But he has a strong sense of justice beneath that cheerful exterior, and cannot help but aide those in need.

A thief with great energy and a sharp wit, though all is lost when it comes to women.

Zidane Tribal is one of the heroes fighting for the side of Cosmos in Dissidia Final Fantasy. Lithe and graceful, Zidane excels at midair battling, and can run rings around foes in arenas with few footholds. During his quest to find the Crystals, he befriends Bartz and Squall, However, Kuja lays traps for them with the intent to make Zidane feel powerless and break his spirit.

Zidane's appearance is heavily based on his original concept art, but keeps a resemblance to the anatomic style from the designs of Toshiyuki Itahana. He wears a teal vest over a white sleeveless shirt with blue pants and several belts. He has large white and blue gloves and white boots, and has a monkey-like tail. His weapons of choice are two Mage Mashers, which can combine into the thief sword The Ogre.

Zidane's first alternate outfit, "Navy Gilet," is based on his Yoshitaka Amano artwork. His clothes are dark purple, his Mage Mashers are dark green to make them appear closer to the Ogre's color scheme, and his hair is a lighter shade of blond. His EX Mode form in this outfit is a gray palette swap.

Zidane's second alternate outfit is "Pluto Uniform," the uniform of the Knights of Pluto he steals and disguises himself with in the opening scenes of Final Fantasy IX. He wears a single piece chestplate with gray-green shorts. He bears a sword sheath strapped over his torso, and a small round shield on his left arm. His EX Mode form in EX Mode is purple.

Zidane's third alternate costume, "Marcus's Cloak" (listed in some regions as "Marcus's Hoodie"), is available as DLC. It is an original design by Hideo Minaba, Final Fantasy IX's art director and the original character designer of Zidane and Kuja, and is based on the cloak he wore to disguise himself during the game's ending, which includes light brown patterns along the cape and a large hood. Zidane's EX Mode form in this outfit colors his fur white, but he remains mostly clothed, removing only his gloves, boots, and lowering his hood. In this outfit, Zidane's Mage Mashers are black.

Zidane's Crystal is the Crystal seen in the Final Fantasy IX logo, which also appears in the Crystal World.

Zidane is first seen with the rest of the Cosmos warriors receiving powers from Cosmos herself. When everyone sets out, Zidane runs into Kuja. Surprised to see him, he talks with Kuja, believing him to be a warrior of Cosmos himself. Kuja asks Zidane to gather his comrades after explaining that if Chaos himself were defeated, then the Chaos warriors would vanish also. Zidane set out to find some friends, then eventually convinces Squall and Bartz to join him. Kuja later meets up with all three warriors and tries to convince them to leave, but they are interrupted by The Emperor, Ultimecia, then Kefka. Kefka explains to the Cosmos warriors that Kuja actually was working for Chaos.

Kuja then says that he had gathered Zidane and company so that he may eventually crush them. He battles all three by himself; however, Kuja allows them to escape. Later on, Kain attacks Zidane and leaves him unconscious. After a battle, Ultimecia points out Zidane to Tifa, warning her of Kain's acts of betrayal. Before Tifa can help Zidane, Kain returns, disappearing with Zidane in his arms. Later, Kain explains to Tifa that he attacked Zidane so that he may "sleep" for Cycle 13. Zidane at some point runs into the Onion Knight and says to him that they need to defeat Chaos himself, but that he does not know what will happen after that. In Report 11, when Laguna is talking to Squall, he mentions Zidane. Thinking that Zidane's tail was fake, he yanked on it, which Zidane "sure wasn't happy" about.

Bartz and Zidane are attacked by a group of manikins while looking for the crystals, and Squall comes to assist them. After the battle, the two invite Squall to join them, but Squall declines their offer, stating that he prefers working alone, which leads to Bartz giving him a chocobo feather as a good luck charm.

Bartz and Zidane propose a contest to see who obtains a crystal first, but their "treasure hunt" is cut short when Bartz disappears in front of Zidane's eyes, having fallen for a trap meant for him. Zidane is ambushed by Kefka, who helped Kuja set up the trap, and the two fight to a standstill. Zidane finds out Bartz has been captured by the forces of Chaos and has been taken to their base.

Zidane later finds Squall cornered by both Garland and Ultimecia. Zidane rushes to his aid, tackling down Garland and fighting him, while Squall fights Ultimecia and receives his Crystal. After the fight, Garland laughs at Zidane and vanishes, leaving him to join up with Squall as they go on to look for Bartz. They eventually find him, and Bartz reveals that he escaped on his own, obtaining what appears to be a Crystal. It turns out to be another trap set by Kuja, warping Zidane to his nemesis, who taunts him by telling of the fall of his friends.

Cosmos pays Zidane a visit, and Zidane laments that there is nothing he can do to help them. Cosmos reassures him that his friends believe in him, and he should believe in them in return. Taking it to heart, Zidane encounters Kuja once again. Zidane wants to go back to his friends, and Kuja believes it is pointless to believe in "strangers." But after infuriating Kuja by asking about his relation to the other Warriors of Chaos, Zidane fights and defeats Kuja. Zidane then receives his Crystal, which teleports him back to Bartz and Squall.

Later on, he talks with Firion about his reason for fighting. When the weapon-master gives "The Wild Rose" as an answer, Zidane asks him if that is what he calls his "princess," in reference to Princess Garnet of Final Fantasy IX. Before Firion can reply, they suddenly hear something behind them and run off to investigate.

After all the Crystals have been collected, Chaos appears out of nowhere, who not only subdues the heroes with his power, but also incinerates Cosmos in front of them. After the Warriors have overcome their own erasure, they set out to defeat the Warriors of Chaos once more. Along the way, Zidane cheers up the disillusioned Onion Knight when he questions their existence.

Zidane runs into Kuja, who is bent on his envisioned finale. However, Zidane wins the fight, and as result, Kuja is lamenting over how he lost everything as he asks Zidane to finish him off. However, Zidane instead extends his hand to Kuja, with the latter refusing it as he asks Zidane if there is something else he would rather seize. When fading away, Kuja comments that "he will return there someday," with Zidane agreeing in belief that they will both one day, return to their home. Zidane, along with the other heroes then battle Chaos. When the Warriors of Cosmos emerge victorious, Zidane ends up in World A before fading back to his homeworld as he tells his friends that they are going back to their promised places. Template:Endspoilers

Template:See Also Zidane is an Aerial Ace. While he does not have that many ground attacks, many of these attacks launch the opponent into the air, easily taking the battle airborne. He has one of the largest pool of aerial attacks in the game, and can easily chain his attacks into each other. His attack list consists of his Dyne techniques and various dagger attacks and throws, and he has several Bravery to HP combos. He also has a very fast ground movement. A downside to Zidane's speed is that his attacks are rather weak, and he is most proficient fighting with melee techniques as his few ranged attacks are weak and easy to block.

Zidane is fought as a boss in Distant Glory and Inward Chaos. 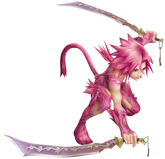 Zidane's EX Mode is his Trance form from Final Fantasy IX. While in EX Mode, Zidane gains the abilities "Aerial Jump" and "Dodge Jump". The former allows Zidane to jump ten more times than usual, in addition to any jump boosting abilities he has equipped, while the latter makes Zidane invincible to some attacks while jumping. In Dissidia 012, Zidane also regains his jumps after dodging, which other characters normally no longer do.

Zidane's EX Burst is Reverse Gaia. The player must rapidly press the

button to fill up a power gauge as Zidane dashes past the opponent from multiple angles to attack. Zidane ends the EX Burst by circling the opponent attacking multiple times. Failing to press the button quickly enough will result in Zidane skipping to the end of the attack, minimizing the Bravery damage done.

Retrieved from "https://finalfantasy.fandom.com/wiki/Zidane_Tribal/Dissidia_(PSP)?oldid=1143172"
Community content is available under CC-BY-SA unless otherwise noted.