One of the dominion's Primus l'Cie, Lord Zhuyu fights foes using fierce flames, a symbol of the Vermilion Bird he has served for so many moons.

Zhuyu is a Vermilion Bird l'Cie who has been branded for many years and is slowly losing his memories along with his emotions. As a former student at Akademeia, he continues to wear his old cadet uniform to retain some sense of his original self. According to the Rubicus, Zhuyu's age is unknown, and he is 6'1" tall. His l'Cie brand is on his left shoulder and he has steel gray hair, a scar across his face, and three earrings on his left ear. In Final Fantasy Awakening, his hair is silver.

Zhuyu's humanity is being sapped from him for being a l'Cie, and he is stoic and usually uninterested in the affairs of mortals. He talks in a monotone voice and follows the Crystal's guidance like ordered.

The novel tells the story of the previous cycle just before the final cycle as depicted in the game. Zhuyu refuses to take part in the war effort when Milites attacks the Vermilion Peristylium, but comes to Class Zero's aid when they are confronted by Nimbus, the White Tiger Primus l'Cie, at Togoreth. After Queen Andoria's assassination, Trey has been feeling there's something strange about the way l'Cie act, and when researching on l'Cie's true motives in the Akademeia library, comes across Lord Zhuyu's old notebook that tells the tale of how he became a Vermilion Bird Primus l'Cie. He gradually lost his humanity, and stopped writing when he was completely taken over by the Crystal. Trey and Cinque read the notebook and learn that Zhuyu had once accidentally killed his Class Zero friends when clashing with another l'Cie.

Trey and Cinque head to the crystal room where they find Lady Caetuna and Lord Zhuyu. Trey asks if the l'Cie only act when it would further incite the war, citing various examples of l'Cie behavior he had witnessed, including how Andoria allowed herself to be killed by Milites to inspire her nation to take up arms. Zhuyu only states that l'Cie act according to the Will of the Crystals. Trey deems it impossible to get answers out of Zhuyu due to him having lost all his humanity, but Cinque points out that Zhuyu still wears his old Class Zero uniform, perhaps to remind himself of once having been human. Cinque brings up the painful details they had learned from Zhuyu's notebook to bring out the memory of human emotions in him, and Zhuyu finally admits that Trey's hypothesis is correct, but denies that the Crystals seek world destruction, and only want to temper people through warfare.

Militesi MA outfitted with Ultima Bombs attack Akademeia and Zhuyu and Caetuna head out to prevent the attack. Zhuyu defeats three MA until being defeated and enters crystal stasis.

When rumors of Zhuyu being on the move spread, many are surprised as the Crystal doesn't usually bother with the woes of mortals. Unusually, Zhuyu accompanies the Rubrumite army, although he posits his allegiance lies with the Crystal, not with the dominion.

When Nimbus, a White Tiger Primus l'Cie, is sent to reclaim Togoreth that has been overtaken by joint Rubrumite-Concordian forces, Zhuyu is sent to intercept him. Zhuyu asks whether Nimbus's mission at the stronghold is his Focus given to him by the Crystal, but Nimbus declines to answer, and Zhuyu draws his blade. As the first known confrontation between l'Cie in five centuries, Zhuyu and Nimbus's battle lays waste to the entire area.

When Class Zero infiltrates the imperial magitek facility to destroy their prototype MA, Lady Caetuna, a Vermilion Bird Secundus l'Cie and the most senior l'Cie in Orience, meets Zhuyu in the crystal room. Zhuyu remarks they haven't seen each other for a long time, but Caetuna implores that something is about to happen, and that the two of them are mere puppets to a greater will. The Vermilion Bird Crystal begins to shine, and far away in the imperial capital of Ingram Queen Andoria invokes the Fabula Pact, a peace agreement made between the four peristylia of Orience that grants a short-lived ceasefire. After Andoria is assassinated her successor, the King of Concordia, allies with the Militesi Empire against Rubrum and the dominion is greatly outnumbered.

The dominion Central Command prepares for the upcoming showdown against joint Militesi-Concordian forces. The plan is to send Class Zero with Lord Zhuyu to fight off the Concordian dragons with an airship fleet, and send the rest of Rubrum's legionaries, and Akademeia's cadets and trainees, to the Militesi border for Lady Caetuna to summon a Verboten Eidolon. Two l'Cie taking part in Rubrum's military operations simultaneously is unheard of, and many see it as a sign of the dominion's, and thus the Vermilion Bird Crystal's, desperation, as by now all the other Crystals of Orience have been subjugated by the empire that has devised a machine to enslave them.

Zhuyu is deployed into the First Battle of Judecca where he faces the Concordian Primus l'Cie Soryu after it annihilates the dominion's Eidolons. As Zhuyu draws Soryu away from the battle the dominion forces engage the royal army and emerge victorious.

Rubrum eventually conquers all of Orience and Tempus Finis commences, the Rursus attacking Akademeia. Zhuyu defends the Vermilion Bird Crystal but is defeated by Gala's surprise attack and forced into crystal stasis. Some time later, Rem Tokimiya takes his place as a Vermilion Bird l'Cie.

In Final Fantasy Awakening, Zhuyu wields his two-handed axe as his main weapon. Like Cinque, he can spin his axe to deal critical damage as one of his special skill and the other is to heavily slash his opponent. His strongest skill is to charge himself in burning flames and form two or three flaming versions of himself to assist him for a limited period to deal massive damage. When fighting multiple opponents, he can form four or six flaming versions in separate places while refilling his limit bar. He appears stronger than Rem in terms of damaging the enemy in critical hits. In World Boss, Zhuyu is stronger alongside Gilgamesh, Caetuna, and Nimbus, as he retains his skills from when he is recruited. He can also spin his axe for a limited period. His strongest skill is more powerful as he creates four or six flaming versions of himself to wipe out everyone.

In the Augite System, Zhuyu gains another form named Hercules, an Augite who wields a dual two-handed axe and is better than his normal form in dealing critical damage. Zhuyu would be tested by Caetuna by destroying the Vermilion Crystal before turning into Hercules by wielding his dual two-handed axe.

In the English version, he is voiced by Marc Worden. 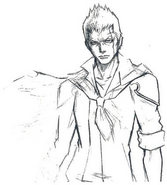 Zhuyu and Caetuna gaze at the Vermilion Bird Crystal.

Zhuyu flies with the power of Vermilion Bird.

Screenshot of a younger Zhuyu in Final Fantasy Agito.

"Zhuyu" comes from two Chinese words: Zhū (朱) and Yù (昱). "Zhū" can be used as an adjective for "vermilion" or something bright red. Yù means "light". "Zhūyù" is literally translated to "vermilion light".