A holy mace for the smiting of evil. It is said to have appeared in a ray of heavenly light, and served the pure of heart ever since.

The Zeus Mace (メイス オブ ゼウス or メイスオブゼウス, Meisu obu Zeusu?), also known as the Mace of Zeus, is a recurring weapon in the Final Fantasy series. It is most often used by mages and is one of the more powerful magical weapons.

Great mage's staff. Infused with the power of the gods. Can be used two-handed.

The Mace of Zeus is a staff that provides 78 Attack, 90 Accuracy, and +3 Magic. In the Game Boy Advance and 2013 ports, it is found in the Hall of Doubt area of the Ruined Shrine of the Sealed Temple. It can be used by Freelancers, White Mages, Time Mages, Red Mages, Chemists, Mimes, and Oracles.

The Mace of Zeus is Vivi's ultimate weapon and the most powerful staff. It teaches the spell Doomsday, and provides 35 Attack and inflicts Mini with Add Status 15% of the time Vivi uses Attack. The Mace of Zeus can be found in Memoria, in the top-left corner of the Stairs room. Obtaining it yields The Ultimate Mace achievement/trophy in the versions that support an achievements system.

The Zeus Mace is the second-most powerful mace. Equipping it boosts the power of Dark-elemental spells. Maces have average at attack speed. In the Zodiac versions, it can be equipped by the Red Battlemage.

The Zeus Mace is one of the four of Kytes's most powerful weapons, and it is of the Thunder-element. With it, Kytes's attacks come out in three "prongs" extending from him. Its recipe is found in the Hammer of Lightning. It uses a generic rod sprite during battle.

A staff that increases the strength of its user.

The Zeus Mace is one of the most powerful staves. In the War of the Lions version, it is a reward for defeating Bremondt Freitberg or found under a trap in the third floor of the Midlight's Deep. It has provides 6 Attack, 15% Defense, 1 Magic Power and +2 to Attack.

Holy mace made to drive out evil.

The Zeus' Mace is an extremely rare item only obtained through the "Plain - Plain - Mountain - Mountain" Treasure Hunt, or as a hidden stealable item from the enemy Alchemist in Mission #014: Golden Clock. It is equippable by Alchemists and Sages, and the Sage can learn the powerful spell Ultima Blow from it. It provides +15 Attack, +5 Magic, +5 Resistance, increases the power of Holy-elemental attacks, and is Holy-elemental itself.

The Zeus's Mace is the most powerful mace providing +50 Attack and +5 Magick and Resistance, and teaches Ultima Blow to the Sage and the ability Transmute to the Alchemist. It can be bought for 10,500 gil in the shop after creating it in the Bazaar after using a Lightwing Crystal, Godwood, and Hero Tonic. It is Holy-elemental.

The Zeus Mace adds 75 ATK and 12 MND when equipped. If the item is in the party's inventory, it will cast Divine Shot which brings the target down to 1 HP.

The Mace of Zeus is the second strongest staff. It is a level 92 weapon that adds 38 to base Bravery, 61 to Attack, and increases EX Mode duration by 40%. It can be traded for at the shop for 29,570 gil, the Staff of the Magi, Revival Tree x5, and a Green Gem.

A mace of unspeakable power, truly fit for the mighty god whose name it bears.

Mace of Zeus grants +10 to Attack. It can be equipped by White Mage, Devout, Sage, Rydia, Krile, Eiko, and Yuna.

One of the twelve shining arms. The power exhibited by this mace is compared to that of a smite from god, and each swing pulverized anything it came in contact with, even the largest of boulders. Despite being known as a weapon fit for the gods, no one knows where exactly this mace is, and many scoffed at it as being something purely of legends. It is said that only those acknowledged by the machine weapon, Elnath, would be able to lay their hands upon this weapon.

Mace of Zeus is a Mace obtained by defeating Elnath in the Chamber of Arms. It provides 110 ATK, 98 MAG, and grants access to the ability Ultima Blow.

Mace of Zeus is a staff that can be equipped by Yui. 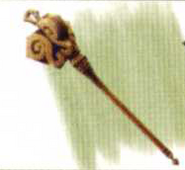 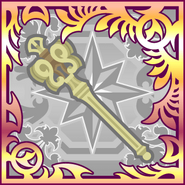 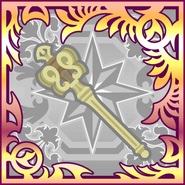