Honoring the law more than any other, a scion of holy order and condemner of criminals. Created in opposition to Knight-Star Pashtarot, scion of light. He turns his deep, abiding hatred for those who break the law into living darkness, therein to plunge the guilty in fell judgment. Over time, he came to care less for upholding the law and more for condemnation, and so tainted by hate, he sought to condemn the gods themselves to death. Thus, did he earn the title "The Condemner," and thus did he fall from grace.

Zeromus the Condemner (断罪の暴君ゼロムス, Danzai no Bōkun Zeromusu?, lit. Zeromus the Tyrant of Conviction) is an Esper from the world of Ivalice. The Esper of Gravity, he represents the zodiac sign of Cancer, the Crab, and thus has a giant claw. From his power of Gravity, his color sign is indigo. He is also referred to as the Karka Ascendant, which is the Sanskrit name of its zodiac sign as used in Jyotish (Hindu) astrology.

Zeromus is based on the final boss from Final Fantasy IV, Zeromus. Beyond sharing the name, they use the signature attack, Big Bang, and are both beings consumed by hate. The Esper's design resembles Zeromus's alternate form.

Zeromus is located in the Stilshrine of Miriam, in a hidden chamber accessed by using the Stone of the Condemner at a Way Stone. The player receives the stone by speaking to an acolyte at Mt Bur-Omisace, after Judge Bergan has been defeated.

Zeromus's license costs 50 LP, and he requires two Mist Charges to summon. Zeromus is the second largest Esper after a winged Zodiark, as his length is measured by his long tail.

Zeromus is a Scion. He can be called by anyone equipping the Condemner's Choker when the Smash Gauge is orange. Zeromus's Wrath, Big Bang, deals damage to one enemy equal to the amount of HP lost by the caster. 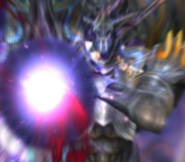 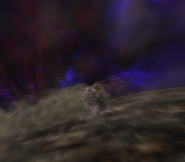 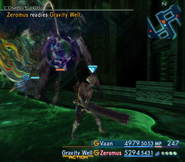 Zeromus is a reference to the final boss of Final Fantasy IV. [view · edit · purge]Zeromus is an extended version of Zemus, which is Amharic for "Prayer". Perhaps because of the added 'Zero', it means "No Prayer".

He is also referred to as the Karka Ascendant, the Sanskrit name of its zodiac sign as used in Jyotish (Hindu) astrology.