Zeromus is the final boss of Final Fantasy IV. It is the spirit and hatred of the rogue Lunarian Zemus, reborn after his death, the personification of malice itself. The knight Cecil and his friends face Zeromus to save their world from destruction.

Zeromus is initially a blue incorporeal being, unable to be harmed, but once Cecil uses the Crystal on it, Zeromus reveals its physical form: a beige insectoid alien.

A being of pure hatred, Zeromus was born from Zemus's extreme hatred. It wants to let others suffer and destroy everything. Even in defeat, it proclaims to always linger as long as evil exists in the hearts of the living. In the Advance and Complete Collection releases, Zeromus refers to himself in the plural as "we." 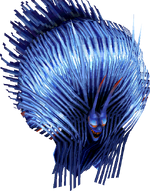 My hatred will not be stanched until it has consumed all else! You shall be next. Come! Pass into this darkness I have wrought!

Zeromus appears within the core of the Red Moon. After Fusoya and Golbez kill Zemus, Zeromus materializes out of his corpse and attacks them, wounding Cecil and his allies. Golbez and Fusoya cast the legendary Meteor, but Zeromus is incorporeal and their attacks do nothing. Golbez attempts to use a Crystal to render Zeromus vulnerable, but as Golbez is tainted in darkness, him using the Crystal is pointless. Zeromus casts his own Meteor, knocking down Fusoya, Golbez, and the party.

With seemingly no one left to stand against Zeromus, Palom and Porom (on Earth) sense Cecil is in danger. The Elder of Mysidia leads Cecil's allies in prayer to send strength to him, giving him and his allies the power to stand again. Using the Crystal Golbez gives to him, Cecil renders Zeromus corporeal, revealing his true form. When killed, Zeromus fades with an anguished cry, but warns he will always exist as long as there is hatred in the hearts of people.

Evil is evolution at its purest...

The Mysterious Girl drains the Crystals of the Red Moon of their energy and they shatter as Golbez and Fusoya race to the center of the moon to ensure the rest of the Lunarians are safe. When they reach the core the final Crystal shatters, and with them gone Zeromus's restraints fail, and he is reborn as Zeromus's Malice.

After the two fight Zeromus's Malice he uses Big Bang to weaken them, and Fusoya teleports Golbez to the Lunar Whale, urging him to get to Earth and help protect its Crystals. The fates of Fusoya, the Lunarians and Zeromus are unknown, with Golbez setting out in the Lunar Whale to investigate them if he survives.

As the final boss, Zeromus is a dangerous opponent. He has two signature moves, Black Hole, which nullifies any status effects (positive, or negative) on the party, and Big Bang, which does massive non-elemental damage. He also has access to Bio, Flare, and Meteor. In the SNES version if Cecil is equipping the Avenger, he cannot use the Crystal on the first form of Zeromus because he is berserked, effectively making the battle impossible.

In the Advance and The Complete Collection releases, Zeromus EG appears in the Lunar Ruins as an optional superboss. He knows several elemental and status spells along with the original Zeromus's Black Hole and Big Bang.

In the Nintendo DS version, a Zeromus costume for Whyt can be obtained by completing the Bestiary.

Zeromus is revived as Zeromus's Malice and is fought at the Crystal Palace. He can use Big Bang once as his final attack.

The resentment of Zemus, unable to accept death, grew to a scream of hatred that will threaten to destroy the whole world. Within his grotesque smile is the Lunarian's fury at the world he failed to make his own.

Zeromus appears as an enemy in Battle Music Sequences. 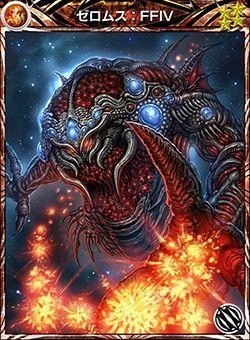 Zeromus appears with a lightning-elemental card.

Zeromus appeared as part of the Final Fantasy Collaboration. The collaboration event took place in the North American version from 2 to 15 November, 2015.

The Esper Zeromus from Ivalice is named after him. They both have Big Bang as their signature attack and are both corrupted by hatred. The Esper's design is a composite of the original Zeromus artwork by Yoshitaka Amano and the parasitic design of his final boss sprite.

It's possible for certain copies of Final Fantasy IV to freeze if the player goes back and forth between doors 64 times: 64 door hierarchy glitch. Square's defunct newsletter, "Ogopogo Examiner," wrote this glitch off as a "trap created by Zeromus," and called it the "8² curse of extinction." Eight to the second power of course being 64.

Zeromus in the SNES version. 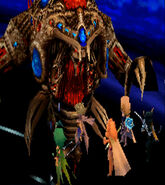 Akira Oguro artwork of the final battle against Zeromus, for the official novelization of Final Fantasy IV.

[view · edit · purge]Zeromus is an extended version of Zemus, which is Amharic for "Prayer". Perhaps because of the added 'Zero', it means "No Prayer".