Zenos's default player title is Nameless Resonant and his manikin, the Mirage of a Resonant, is aquamarine.

Zenos' default costume, "Imperial Crown Prince", is taken from his main appearance in Final Fantasy XIV: Stormblood, excluding his helmet. He dons a full-plated armor colored in burgundy, with winged motifs on his shoulder pads. He wears two separately colored sashes; a red sash that also can be seen wrapped across his body and arms, and an orange sash wrapped around his waist. In battle, he carries around a "Sword Revolver", a large barrel-shaped holster in which he sheathes and switches between his three katana that he wields individually. The first alternate coloration of this costume recolors his armor dark navy with his sashes in blue and shades of turquoise. The second alternate coloration recolors his armor dark silver with his sashes in gray and shades of blue.

His first alternate costume is his "Imperial Court Attire", which is Zenos' main appearance from Patch 5.2. He no longer wears a full set of plated armor, but retains aspects of his default appearance coloration, wearing burgundy metal boots and an armored chest plate along with a red sash seen around his waist and tucked in his boots. He wears a pair of brown pants, fingerless gloves and shirt underneath his armor, and now has a large white overcoat with golden orientations and large shoulder pads that he wears over his shoulders as opposed to wearing it through his arms. His Sword Revolver is now more high-tech in appearance, resembling the Magitek of the Garlean Empire, with a primarily silver design and glowing red patterning. This first alternate coloration of this costume recolors his armor and coat black and his sash purple, while the second recolors his armor black, his coat olive green, and his sash blue.

His extra alternate costume is "Legatus of the XIIth", similar to his default appearance though now donning his helmet, as seen in promotional art and in-game throughout Stormblood. His helmet resembles a mask with four horns; two smaller horns extending from the crown, while the two larger ones extend from the side. The mouth and nose of the mask match the color of his burgundy armor, while the forehead and eyes are white with a skull-like motif and a large orb on the forehead, matching the same one on Zenos's forehead. His voice is also slightly modified to sound more metallic and muffled, as in the original game. 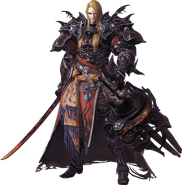 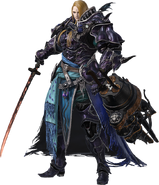 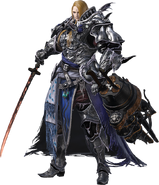 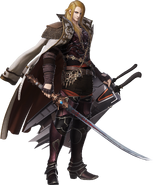 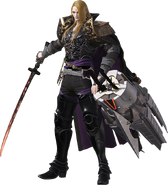 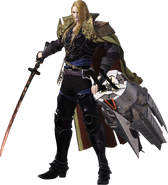 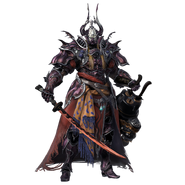 Legatus of the XIIth I.

Zenos wields katanas. In battle, he switches between three different katanas as he did in Stormblood, though only one can be replaced through Weapon sets; his permanent katanas are called The Swell and The Storm. All weapons hail from the world of Final Fantasy XIV, but only The Swell, The Storm, and Ame-no-Habakiri are equipped by Zenos. Susano's Tachi, Shinryu's Katana and the Omega Samurai Blade are loot that can be dropped in high difficulty versions of the boss battles against Susano, Shinryu, and Omega respectively.

His default weapon is Ame-no-Habakiri, a red katana forged by the Kojin, one of the many beast tribes that inhabit the world, and was acquired by Zenos during the events of Stormblood. His first alternate weapon is Susano's Tachi, the second is Shinryu's Katana, and the third is the Omega Samurai Blade. All three are obtainable weapon drops or purchasable weapons in Stormblood by defeating the Extreme versions of their respective boss encounters. 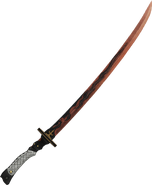 Prior to Zenos' reveal, producer of Final Fantasy XIV Naoki Yoshida expressed his approval for either Nael van Darnus, Alphinaud Leveilleur and Zenos to be added as the second playable representative for Final Fantasy XIV,[1] with Zenos eventually chosen.

He was revealed as the seventh DLC character and the first to be separate from the Season Pass on March 24, 2019. He was added in the arcade version on March, 26th and in the console version on the April, 11th. 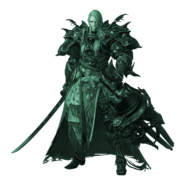