Cloud: I couldn't finish 'em. Looks like this's gonna get complicated.
The following tables are incomplete and require the Info on PSP exclusive battle entries to be filled. If you wish, please examine the table and add anything missing. Remove this notice upon completion.

Few can help but be enchanted by the sight of Zeirchele Falls cascading down the stairlike Algost Mountains.

Zeirchele Falls, also known as Zirekile Falls (ゼイレキレ川, Zeirekire-kawa?) is a location from Final Fantasy Tactics. It is a great waterfall located west of Fort Besselat. It is here that Delita Heiral fleeing toward Besselat with Princess Ovelia in tow ran into trouble with knights of the Order of the Northern Sky, allowing Ramza Beoulve to catch up. Goffard Gaffgarion betrayed them and joined the Northern Sky's attack, but Ramza and Agrias Oaks drove Gaffgarion away and then helped Delita dispatch the Northern Sky. Delita then allowed Ramza to take Ovelia to Lionel Castle.

Zeirchele is the ancient name of a now-nameless river within the Golmore Jungle of Dalmasca. At a waterfall along the river is Orbonne Monastery.

The Zeirchele Falls appear as the background for the Battle Music Sequence for "Precipitous Combat".

Zeirchele Falls in a cutscene from War of the Lions. 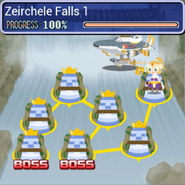 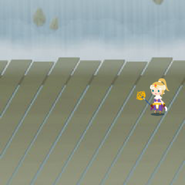