Non-player character
Zeid is a major non-player character in Final Fantasy XI. Aside from being a key figure in both past and present events involving the Republic of Bastok, he is also the mentor figure to players wishing to obtain the Dark Knight job.

An alter ego, or "cipher", players can summon Zeid to assist them in combat under the Trust system.

Twenty-six years before the start of the game, Zeid was a member of an all-galkan platoon that had been sent from the Republic of Bastok to fight powerful monsters summoned by the Shadow Lord. During their journey they were attacked by a monsters. Outnumbered, they called from assistance from a nearby squad to no avail. As the only survivor, Zeid swore revenge for his fallen comrades.

Taking the name "Darksteel Hurricane", Zeid carved the symbol of his platoon onto his forehead and murdered a number of political leaders who had a hand in his troupe's demise. Mission complete, Zeid made his way to Xarcabard, unknowingly followed by Klara Bester, Captain of the Mythril Musketeers. She discovered the demon was manipulating Zeid, feeding his anger and hate towards humes to turn him into a powerful soldier for the Shadow Lord. Klara rescued Zeid by destroying the demon and the crystal that gave it power.

Discovering the truth behind Zeid's actions, Klara offered him a position in the Mythril Musketeers, promising his secret was safe with her.

I don't play by others' rules...so get outta my way.

Zeid is available to everyone as a Trust Magic during the 11'th Vana'versary Login Campaigns No. 6, No. 9, and No. 11 for 500 points as an Alter Ego Cipher. His job is Dark Knight. He wields a greatsword and uses greatsword weapon skills as well as his own specialty attacks, Abyssal Drain (which drains HP), and Abyssal Strike (which inflicts Stun status). He does not use Shadow of Rage when summoned with Trust magic. He will cast Absorb-type spells, Drain, Aspir, elemental nukes, and will interrupt monsters readying their abilities by casting Stun on them.

Zeid is a playable character who could be initially recruited during the Challenge Event The Shadow Stirs as a First Time Reward for completing the event's Delkfutt's Tower stage on Classic difficulty.

Zeid came in eleventh place in a Final Fantasy XI NPC Popularity Contest held by Square Enix in June 2013. Current players were given an opportunity to vote for their favorite NPC and share ideas for stories involving these characters. 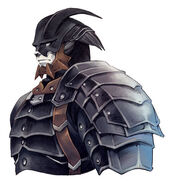 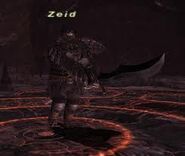