Zdei appear to be a highly advanced form of the Magic Pots that are often found in many other ancient regions of Vana'diel. They are found only in the Garden of Ru'Hmet and the Grand Palace of Hu'Xzoi and act as guards to various areas within the Celestial Capital. When Zdei are unengaged, they are aggressive by true sight from the front side only. Their "eye" continuously rotates in 360 degrees on the lookout for wayward adventurers. When engaged, they switch between three states (bars out, rings out, and nothing out) about every 15-45 seconds, even if asleep. Each state utilizes a different defense mechanism.

Zdei drop only Luminion Chips, which are actually pieces of seemingly organic tissue and are only obtainable from Luminions like Zdei and Ghrah. These chips can be traded to Meret for Virtue Stone Pouches. 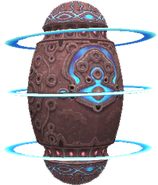 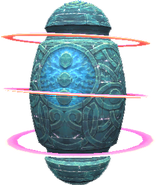