Final Fantasy Wiki
Register
Don't have an account?
Sign In
Advertisement
in: Characters in Final Fantasy XII, Hume in Ivalice

Judge Zargabaath is a non-player character in Final Fantasy XII. He is a Judge Magister, the highest army rank possible in the Archadian Empire. A quieter Judge, he is a voice of moderation and reason among more passionate judges, such as Drace, Ghis, and Bergan. His loyalties lie with Archadia as a nation and idea itself, rather than any individual. He leads the Imperial 12th Fleet aboard his flagship, the Alexander.

Zargabaath is an older man with short gray hair. As with all the Archadian Judges, he wears steel plate mail armor with a black cape, the symbol of the Empire on the back in red. His helmet bears a pair of horns pointed forward on a downward angle, and his armor bears symmetrical red markings down the chest and helmet. His weapon is a dual-bladed sword that, like the weapons of the other Judges, can be separated and the two halves dual-wielded. The blades that serves as Zargabaath's primary weapon bears a long, complex blade mechanism, while the other blade, held in a reversed grip, bears a smaller mechanism with blades on both edges.

Zargabaath is reserved, only speaking when he needs to. He is loyal to the Empire rather than a specific Emperor, and though he does not speak out against Vayne Carudas Solidor openly, he is aware of the carnage Vayne inflicts upon his enemies in the Empire's name. Zargabaath acts as the voice of reason among the Judges, warning Drace about speaking against Vayne and asking him to spare her when he orders her executed for baring her sword at him. Zargabaath's actions in battle above Rabanastre with the Resistance show him to be a noble man with no taste for needless destruction.

In the manga adaptation, Zargabaath used a Teleport Stone to move into the Nalbina Fortress in the battle of Nalbina Fortress, overseeing the Archadian objective to destroy the Fortress's Paling.

You would do well to mind your tongue, Drace. That matter is long past.

Zargabaath warns Judge Drace not to dig too deeply into matters that do not concern her. While Zargabaath did not object to Vayne becoming autocrat as he wanted to avoid internal strife within the Empire, he tries to get Vayne to spare Drace's life, but Judge Bergan is more than willing to help out in Drace's execution. Commanding the Alexander, Zargabaath leads the newly-formed 12th Fleet to Mt Bur-Omisace where he does not engage in combat, as he is simply transporting troops.

Zargabaath later leads the Imperial fleet defending the Sky Fortress Bahamut. It is up to him to block all Resistance fire while the Bahamut's cannon charges. After Vayne is killed, the Bahamut starts to fall onto Rabanastre. Zargabaath volunteers to ram the Alexander into the Sky Fortress to save the people of Dalmasca, but at the end does not have to, thanks to interference from sky pirates Balthier and Fran. As such, Zargabaath is the only Judge Magister to survive the events of the game.[note 1]

Judge Zargabaath can be fought in the International Zodiac Job System Trial Mode, at Stage 100. He focuses on buffing Judge Bergan.

Zargabaath was to appear in the cancelled Final Fantasy XII spin-off sequel game as an Archadian Judge who would help Basch fon Ronsenburg defend a magickal fortress from the forces of an invading sea king. Zargabaath was to initially act antagonistic toward Basch because of their past on different sides of the conflict in Final Fantasy XII, but he—as well as other Judges—would help him out of respect.[2]

In the English release of Final Fantasy XII, Zargabaath is voiced by Simon Templeman, famous as the voice of Kain in the Legacy of Kain series. In the Japanese version, he is voiced by Ryūzaburō Ōtomo, who, among many other roles, has voiced Uka Uka in Crash Bandicoot, and Astaroth in Soul Calibur. 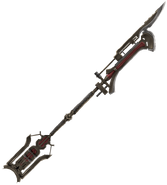 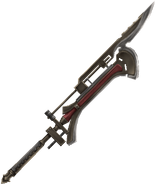 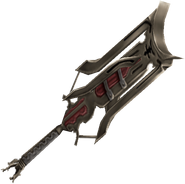 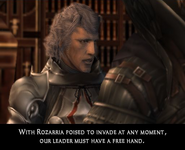 Zargabaath as he appears in-game.

Zargabaath in command aboard the Alexander.