Tetsuya Nomura
Zaon is a non-playable character in Final Fantasy X, who also appears briefly in Final Fantasy X-2. He was the husband of the first summoner to have defeated Sin, Lady Yunalesca. They both lived in Zanarkand over 1000 years before the events of Final Fantasy X. Zaon is depicted wearing a golden knight's armor with four horn-like ornaments and a white cape.

When Yu Yevon first created Sin and went mad, Zaon joined Yunalesca to fell him. She sacrificed Zaon as a vessel to create the first "Final Aeon," and herself for the power to make him strong enough to defeat Sin, all for the brief respite from Sin's depredations that was to be known as the Calm.

Yunalesca remained in Spira as an unsent, making the Zanarkand Dome her abode where she greets summoners who complete their pilgrimage to grant them the Final Aeon by converting one of the summoner's guardians into its fayth. The Final Aeons are not only tasked with killing Sin but doomed to be possessed by Yu Yevon's spirit and become the new Sin. Thus, Zaon was Sin's first slayer, Yu Yevon's first host, and the second Sin. After being defeated as Sin by Gandof six hundred years later, Zaon's unsent spirit found its way to Via Infinito beneath Bevelle.

A thousand years after Zaon first became Yunalesca's Final Aeon, the temple of Yevon has adopted Yunalesca and Zaon's feat as dogma that is given as the only way to defeat Sin, even if it only perpetuates the cycle. Summoners who succeed in following in Yunalesca's footsteps in felling Sin now gain the posthumous title of high summoner, and the summoner's partner(s), modeled after Zaon's role, are called guardians. Zaon could thus be viewed as the original guardian, though the term did not exist yet by his time. Many summoners have attempted to complete the pilgrimage to bring about the Calm, but the Sin always returns even if the pilgrimage is a success.

When Seymour Guado welcomes Yuna and her guardians to Guadosalam and shows them visions from his sphere, it includes images of Yunalesca and Zaon. As Yuna's namesake, Seymour reminds her Yunalesca did not defeat Sin alone. "To defeat the undefeatable Sin, it took an unbreakable bond of love, of the kind that binds two hearts for eternity". This is his preamble for a proposal of marriage to Yuna.

As Yuna's party arrives to Zanarkand they find Zaon's fayth in the Chamber of the Fayth, but it is just a mere stone tablet, its spirit lost.

Yuna, Rikku, and Paine can enter Via Infinito and witness Yunalesca and Zaon embracing, as they had in Seymour's sphere, before Zaon disappears and Yunalesca transforms to her fiend form, Chac. At the lowest floor, they encounter Zaon transforming to his fiend form, Paragon. The girls beat him, but he is destroyed by Trema.

Zaon is fought as a fiend similar in appearance to the Omega Weapon. He boasts high HP, Strength, Defense, and Agility, yet his Magic and Magic Defense are average. His normal state gives him access to Attack, Big Bang, Genesis, and Supernova, however when under the effects of the oversoul, Paragon gains access to tier three Black Magic spells, Ultima, Holy, Demi, Dispel, and Judgment making him a more fearsome foe though he is slightly easier in his oversoul form than in his normal form.

Artwork of Zaon on the right of the Spiran map. 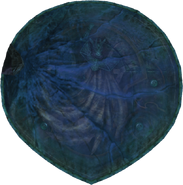