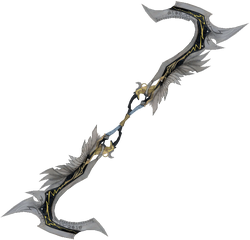 The Zantetsuken is a pair of identical large curved swords that each form a hook shape. The hilt is formed from a golden horse's head and front hooves, with the blue handle and lower section of the handguard coming from the head and hooves and joining at a golden pommel, which is where the blades connect. From the bottom of the horse head's neck extends a white plumage of feather-like spikes along a central green core decorated with lightning-like jagged yellow lines. The inside of the blades' hook shape bears writing in Etro script, which reads "Odin." The Lightning Returns model features a different handle, with the pommels being larger and the blue handles and handguards being smaller and differently shaped.

The Zantetsuken can be wielded as either two individual swords or a single double-bladed sword. The swords face opposite directions when connected, forming an "S" shape.

Lightning wields the Zantetsuken in the prologue sequence while riding Odin. Twilight Odin wields his own version of the swords, predominately colored green.

Lightning obtains this weapon from Odin himself as a symbol of his continuing support upon completion of the quest "To Live in Chaos" in the Wildlands. The weapon's name is not Zantetsuken, but Gagnrad, which is another name for Odin. It increases Strength by 500, Magic by 500, ATB Speed by 25, decreases maximum HP by 5% and Stagger Power by 90%. It also has two passive abilities, Strength -50%. It is classified as a dual-blade, and attacks twice per turn when attacking. The Angel of Valhalla also has a tattoo in the shape of Zantetsuken above his left eye.

Zantetsuken appears as Odin's weapon during the event Lightning Strikes.

Lightning's level 100 exclusive weapon is also named Zantetsuken. It provides +68 attack, +10% defense, and a Riposte effect, and can be traded for in the shop for an Omega Weapon, Survival Knife, Flash's Hope x5, and 182,800 gil. As a likely reference to Zantetsuken existing as two swords, Lightning has a second Level 100 exclusive weapon named the Odin Blade (グングニルブレード, Gunguniru Burēdo?, lit. Gungnir Blade). The Odin Blade also has 68 attack, but instead provides the abilities Back to the Wall and Free Air Dash Boost. The trade materials and cost are the same, with the exception of needing the Barrage Blade to trade instead of the Omega Weapon.

Lightning uses the Zantetsuken when executing her HP attacks.

Lightning wields and attacks with the Zantetsuken when performing Lightning Strike against the enemy during battle. 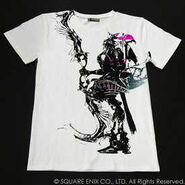 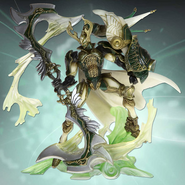 Artwork of Odin and Lightning depicting the Zantetsuken's two states. 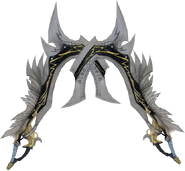 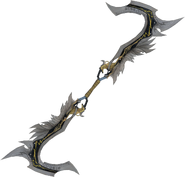 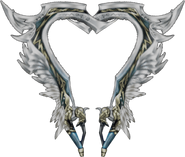 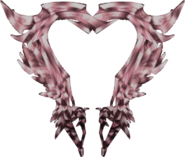 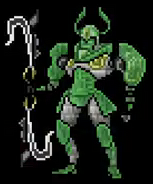 [view · edit · purge]Zantetsuken (斬鉄剣?) is Japanese for "iron-cutting/slashing iron sword". It normally refers to a blade formed out of exotic materials rumored to be able to cut through steel and/or iron. The term was often associated with blades created by the feudal swordsmith known as Kobayashi Yasuhiro. This usually refers to swords made out of unique materials other than steel that are rumored to cut through iron more effectively than normal swords.

[view · edit · purge]Gagnráðr is one of many names for Odin. It means Advantage Counsel.