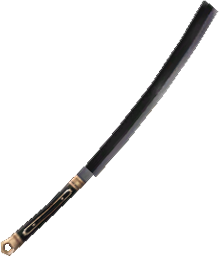 Description, Final Fantasy Tactics A2: Grimoire of the Rift

The (Zanmato, 斬魔刀?, lit. Zanmatō), also known as Zanbato, is a recurring weapon in the Final Fantasy series. It is usually associated with Samurai, and may inflict instant death.

Cyan can equip the Zanmato in the Advance port of Final Fantasy VI. It is the strongest katana available, and yields an attack power of 245, +7 Strength and Stamina, +30% Evasion, and enables the Bushido and Runic command. It can be found in the Dragons' Den by defeating the Holy Dragon, or it can be obtained by betting the Godhand in the Dragon's Neck Colosseum.

It has a slight chance of inflicting instant death on its target, even if that target is undead.

Zanmato is not an equippable weapon in Final Fantasy X, but the aeon Yojimbo can use it as an attack. Yojimbo will be more likely to Zanmato as his Overdrive reaches a higher point.

This attack is similar to Zantetsuken, but, unlike it, Zanmato defeats all foes, even bosses, in one hit, regardless of protection against death. Its odds of occurring depend on the opponent's Zanmato "level," ranging from one to four.

Zanbato is a generic high level Great Katana. It shares its model with the Hagun, a very powerful (and expensive) Great Katana.

Zanmato is an Artefact in Final Fantasy Tactics. The indecipherable script engraved into this enchanted blade identifies it as the weapon once used to slay a demon in a single blow. It is a talwar-type sword of immense size.

Zanmato is a katana that can be equipped by Ninjas and Assassins. Furthermore, it teaches the Assassin Job class Ultima Masher, at the cost of 999 AP. It provides +22 Attack, +2 Magic, increases Holy resistance and halves Dark damage, and is Holy-elemental. It can be obtained after completing Mission #029: Wanted!, from raising Smithing to level 50, or by stealing it from an enemy during Mission #27: Royal Valley.

Zanmato returns as a katana in the sequel, and can still be equipped by Ninjas and Assassins, as well as the new Parivir Job. It still teaches the Ultima Masher ability to Assassins. Illua uses this weapon in her last fight. The Ninja leader of the Duelhorn warband, Maquis the Phantasm uses this weapon throughout the whole Duelhorn storyline, except when he first loses his memory in the Lethean Draught mission.

This katana can be obtained by first placing a Lightwing Crystal, Bundle of Needles, and an Aqua Galac on the bazaar. Once unlocked in the shop, it can be purchased for 5,800 gil. The Zanmato gives +8 to the Magic stat, is of the Holy element, and grants immunity to Dark.

The name Zanmato (demon-cutting sword) is a pun based on Zanmato (horse cutting sword). Properly called a Zanbatō, it is a weapon supposedly made to cut down a horse and its rider in one swing. It is actually adopted from the Zhanmadao. The word 'ma' can both mean horse and demon depending on pronunciation.

Retrieved from "https://finalfantasy.fandom.com/wiki/Zanmato_(weapon)?oldid=1469242"
Community content is available under CC-BY-SA unless otherwise noted.