Akira Oguro
Zangetsu is one of the Eblan Four in Final Fantasy IV: The After Years. He is an older ninja with similar battle prowess as Edge Geraldine, whom he views as his master.

Zangetsu is an elderly man with white hair and a long white goatee. He keeps his hair tied at the back and wears large golden earrings. He wears a black clothing that is brown on the right side. He has a white and red right shoulder guard. He wears a yellow cape and carries his katana on his back.

Zangetsu has aspirations of becoming a shinobi despite being a late bloomer. He admires Edge as his master though he looks young enough to be his son.

Edge talks to Zangetsu among others before heading to the Cave of Eblan. Zangetsu guards the entrance to Eblan, seen if Edge goes outside the cave and heads back to the castle.

When Eblan receives word of Baron stealing Crystals from other nations, the Eblan Four become eager to assist Edge, and are sent on missions to gather information. Zangetsu disguises as a dwarf to freely roam King Giott's castle, and after confirming the Dark Crystal is still safe and the Tower of Babil is reactivated, he returns to the surface via a secret tunnel near the castle.

Zangetsu returns to Eblan by walking across the sea. He reunites with Edge and the other Eblan Four within the Tower of Babil, and after being forced to escape from the Mysterious Girl and Ifrit, they fall to the Underworld and into the Falcon.

In the Gathering Tale, Zangetsu watches over Porom and the other incapacitated characters below the deck of Falcon. After the Creator has been felled and the world saved, Zangetsu continues to disguise himself as a dwarf as Luca upgrades the Falcon. Zangetsu and the other Ninja Guard of Eblan renew their vows of loyalty to Edge awaiting for their next mission.

Zangetsu is effective for both physical and magical combat, though he is limited to Lightning-elemental Ninjutsu attacks. Zangetsu is the only member of the Eblan Four to lack an exclusive Ninjutsu skill.

Zangetsu is above average in offensive stats, with decent Strength and Speed. His HP is greater than the mage characters but not on-par with other physical attackers. His largest asset is his very high Intelligence, which surpasses Leonora's and almost equals Golbez's.

Zangetsu's abilities are Ninjutsu and Human Kite, which functions identically to Jump. He is best equipped with spears for this reason, as like Jump, Human Kite does increased damage when the user is equipped with a spear. Zangetsu can perform Band abilities with the other Eblan ninjas, as well as Luca due to his time undercover at the Dwarves' Castle.

Zangetsu can equip the same equipment as Edge, with the addition of spears instead of claws. Because he cannot dual wield, it is usually best to keep him equipped with a spear.

He starts with a Kodachi, a Leather Cap, a Foot Ninja Gear and Iron Gloves.

Zangetsu is fought as a boss, along with the remaining Eblan Four, at the beginning of Edge's Tale, as part of a training session. 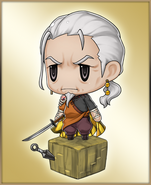 Zangetsu disguised as a dwarf mistakenly chanting as "Nari-ho!" (iOS/Android).

Like the other Eblan Four, Zangetsu's name is related to the moon. [view · edit · purge]Zangetsu means "morning moon" in Japanese.