Zangan is a non-player character in the Compilation of Final Fantasy VII. Zangan has gray hair and wears a cape, and is the resident martial arts master in Nibelheim, training Tifa in the art of self-defense. He boasts that he has 128 students across the world.

When Sephiroth kills nearly everyone in Nibelheim and sets fire to the town, Zangan and Cloud try to rescue any survivors. After Cloud and Zack's confrontation with Sephiroth at the Nibel Reactor, Zangan carries Tifa to safety, but is unable to come back for Cloud and Zack before Shinra and Professor Hojo arrive. Zangan takes Tifa to Midgar for medical attention and departs the town sometime after, unwilling to settle down.

Five years later, Tifa discovers a letter sent to her by Zangan tucked away in her piano in the reconstructed Shinra mock-up of Nibelheim. The letter instructs her to continue her training and speaks of Zangan's suspicions of the reconstructed town. The letter also contains her final Limit Break, Final Heaven. In the letter, Zangan recounts his saving her at Mt. Nibel, and claims "he can't even jump anymore", implying he may have become injured since leaving Tifa. Whatever the case, his ultimate fate once he left Midgar is unknown.

Zangan can be fought as a boss in the Before Crisis -Final Fantasy VII- Training Mode.

Zangan is seen near the beginning of the anime, tending to an injured villager. Tifa runs into him and learns of her father's whereabouts, as well as the whereabouts of Sephiroth. Zangan tries to stop Tifa from going to the mako reactor but to no avail as he still tends to the wounded.

Zangan is only vaguely mentioned in an e-mail sent to Zack by Tifa, and is never actually seen.

Zangan appears in Final Fantasy Trading Card Game as a Fire-elemental backup card. His auto-ability and field ability are related to Tifa, representing their master-apprentice relationship.

Zangan is referenced in an introductory quote by Tifa in Dissidia 012 Final Fantasy when she says "I'll show you Zangan's secret technique!"

During the development of Final Fantasy VII, Zangan himself was intended to be found in Nibelheim, where he would tell Cloud that the survivors of the town's destruction had been killed by Shinra, and he would relate to Tifa that he took her to safety.[1] This exchange was ultimately cut from the game.

Concept art of Zangan was produced for the first entry in the Final Fantasy VII Remake project and appears in the deluxe edition artbook, but the design has thus far not been used, as Zangan has yet to make an appearance in the remake.

Zangan is voiced in Last Order by Hiroshi Fujioka, best known for his roles as Takeshi Hongo in the original Kamen Rider series, and as Segata Sanshiro, the mascot for the Sega Saturn. 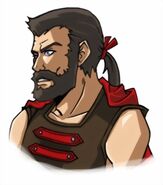