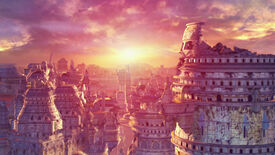 "Zanarkand" (ザナルカンドにて, Zanarukando nite?, lit. In/At Zanarkand), also known as "To Zanarkand", is the main theme of Final Fantasy X, composed and arranged by Nobuo Uematsu who got the idea of the tune for the opening theme from a flautist he consulted for help. He requested the tune to be used in Final Fantasy X and coaxed the team in using it for certain event scenes, but they weren't convinced.[1]

Initially, the theme wasn't composed for Final Fantasy X, or any Final Fantasy-related title, until Ever Director Motomu Toriyama tried using it on the opening scene and deemed it perfect and no other theme would do. Uematsu was also surprised that it was just perfect for it. In the end, the theme, together with "Suteki Da Ne (Isn't It Wonderful?)", became the game's main theme, something Uematsu still finds hard to believe.[1] Toriyama ended up re-editing the scene so the shifts in view to match the track.[2]

The theme plays during the opening, which shows Tidus and the others before the ruins of Zanarkand as they prepare for the final leg of their pilgrimage. Everyone gathers at a campfire at sunset while Tidus climbs up a vantage point to gaze at the ruins solemnly, beginning to narrate how he reached this point.

"Movement in Green" from the HD Remaster

"Zanarkand" shares the greatest importance on the soundtrack with "Suteki da ne", being played at various significant plot events, typically rearranged and under different titles, such as "Movement in Green", "The Truth Revealed", and a large part the "Ending Theme".

"The Truth Revealed" from the HD Remaster

"Movement in Green" was completely redone for the HD Remaster version with addition of Erhu. "Zanarkand" largely follows the same instrumentation as the original, but is performed on a real piano, with less bass and with a pianissimo / piano opening. The Square Enix soundtrack sample website, and the soundtrack booklet, differ in the credits. The booklet credits Nobuo Uematsu as the sole composer and arranger. The website credits Masashi Hamauzu for rearranging the theme. "Zanarkand" is the only theme with this discrepancy.

"Zanarkand" is a Dark Note that appears in the Chaos Shrine. It is included in Theatrhythm Final Fantasy Compilation Album.

"Zanarkand" replaces the "Main Theme" in the main menu during the Final Fantasy X collaboration event.

"To Zanarkand" and "Blitz Off!" in World of Final Fantasy

A piano arrangement of Zanarkand named "At Zanarkand" is featured on the Final Fantasy X piano collections album.

"Zanarkand" was performed by The World Festival Symphony Orchestra at the More Friends - Music from Final Fantasy concert, which took place at the Universal Amphitheater in Los Angeles, California on May 16th, 2005.

Nobuo Uematsu and The Earthbound Papas performed "Zarnakand" in the event.[3]

"Zanarkand" appears as the eleventh track of the album. It is a techno dance arrangement composed by Nobuo Uematsu.[4]

A "To Zanarkand" dynamic theme was released for PlayStation 4 systems. When installed and activated, the theme plays the track "Zanarkand" when the player is in the system's menus and sound effects when accessing menu items match those of Final Fantasy X. The background image is Yuna, Auron, Wakka, Lulu, Rikku and Kimahri gathered around the campfire when in the lower menu, while accessing the upper menu shows Tidus at the top of the ledge, pyreflies drifting across the scene.