You heard of the Barheim Passage? Legend says you can hear the eerie cry of a woman from the depths of that accursed place.

Zalera is an optional boss in Final Fantasy XII fought in the Barheim Passage. Defeating him and obtains him as an Esper summon. He, alongside continuously spawning Dead Bones, is also fought in Zodiac versions' Trial Mode Stage 32, where he has some unique steals: Time Bolts (common), Doom Mace (uncommon) and Hunting Crossbow (rare). Both battles are fought under a time limit.

The symbol on the shamaness's forehead when Zalera uses Prime Lv. Death is the Blood-Sin from Vagrant Story, a tattoo of great power.

To fight Zalera, the player must return to the Barheim Passage, which requires the Barheim Key obtained from the "patient in the desert" quest in Estersand village. Once inside the party should head north, turn west in the section before the gate crystal. Heading to northwest passage, the player will reach to the long rail known as Zeviah Span. At the end at No.7 Terminus the player will fight Zalera and his Dead Bones allies.

Zalera must be defeated within 5 minutes or the party will be ejected to the Terminus 7 adjunct and will have to try again.

Once the battle starts, Zalera will "brace against attacks," summoning Dead Bones, whose attacks can cause Blind. As long as there are Dead Bones present, or Zalera has taken no damage (or damage equaling zero), Zalera's Defense and Magick Resist are boosted by 80 each. After defensive mode ends, Zalera gains the Ignore Evade augment.

Zalera will constantly use the attack Kill to KO the target. The party shouldn't rely on Espers as Zalera will immediately defeat them, and shortly after will aim Kill at the summoner.

Since Zalera is undead, curative spells are effective if the party can work around his Reflect status. Curative items are also effective, but Raise spells and Phoenix Downs do not work.

The player can bring a set of resist accessories to counter Sleep, Blind and especially Disable. As long as the player equips them right after getting the cast warning, the party will be able to resist the spells.

Another way to counter the status effects is to have the party at levels which are not susceptible to them. The only levels which give immunity all of the level-based spells (including Prime Lv. Death) are 49, 77, and 91. If being at these levels is inconvenient, an alternative is to combine this with the previous tactic by having the party at a level only divisible by 2 (e.g. 38, 44) and equipping Nishijin Belts to be immune to Sleep.

Casting Shell or equipping Shell Shield will halve the success rate of Kill.

Using abilities with a guaranteed amount of damage, like 1000 Needles or Gil Toss, is one way to get around Zalera's high defense. A party member with all Potion Lores learned equipped with a Pheasant Netsuke can throw X-Potions at Zalera for damage as well.

One effective method is to cast Reflect on the party, or equip Ruby Rings for Auto-Reflect, and cast Curaja, reflecting the spell to the boss for heavy damage. Because of Zalera's Kill, the Reflect strategy only effectively works if the Ruby Ring is equipped. 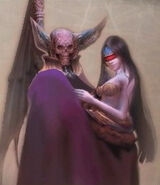 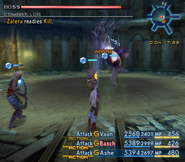 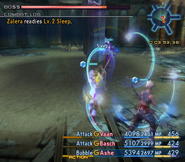 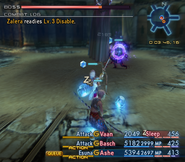 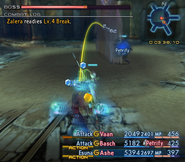 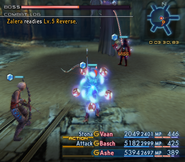