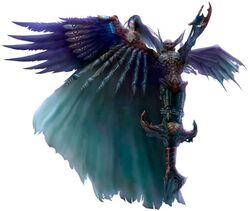 Zalera the Death Seraph (死の天使ザルエラ, Shi no Tenshi Zaruera?, lit. Zalera the Angel of Death) is a recurring summon and creature in Ivalice. He is associated with the Zodiac sign of Gemini, the Twins. His element is Death, and his color sign is violet. His appearance is that of a hellish angel with a shamaness grafted onto his arm. He is known for summoning undead to fight alongside him. He is also referred to as the Mithuna Ascendant, which is the Sanskrit name of its Zodiac sign as used in Jyotish (Hindu) astrology.

Zalera is an optional Esper found in the Barheim Passage, his existence being foreshadowed by NPCs mentioning hearing a woman's screams from deep inside the tunnel. He fights by summoning Dead Bones to attack and using status attacks that hit dependent on the levels of the party members. If the player cannot defeat Zalera within five minutes they are teleported out of the room and must begin the battle over.

Condemnation: is Zalera's ultimate attack. Zalera warps the enemy to another world, and opens his right arm to reveal the shamaness who screams, calling a storm of dark clouds from which souls pour out and create a storm of twisters. The attack instantly kills all enemies with less than 9,999 max HP (6,999 HP for those with the Damage Resist augment), and those with more are hit with non-elemental damage that can break the damage limit.

In Final Fantasy XII International, Zalera no longer casts Holy or Shock. Instead he has Cura, Warp, and Death. He no longer absorbs Holy-elemental attacks. Condemnation's damage is randomly generated.

Zalera is immune against all elements but Holy, which it absorbs. 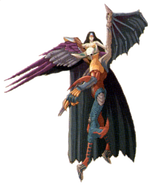 Zalera returns, along with some other Espers, in Final Fantasy XII: Revenant Wings as a Non-Elemental Ranged Rank III summon. Though his nature is Holy, he is not classified as a healing unit like Ultima, because Zalera cannot heal units, rather harnessing the power of light for devastating attacks.

Zalera is one of the Lucavi, and possesses Messam Elmdore as a host during much of the game. It is known as the Angel of Death, and is the third Lucavi demon Ramza Beoulve must fight. Zalera is assisted by two Ultima Demons, Celia and Lettie. During the battle Zalera calls on several undead units to aid him.

Zalera appears as a Scion. He can be called by anyone equipping the Earrings of the Dead when the Smash Gauge turns orange. When summoned, he performs his Wrath, Condemnation, which does Dark-elemental damage to all foes and inflicts both Sleep and Doom.

Zalera appears as a Summonstone bought from a Moogle Shop in the northwestern continent for 120 KP. When equipped, his Condemnation will activate once the enemy has 9999 BRV and instantly inflicts Break status on them.

Retrieved from "https://finalfantasy.fandom.com/wiki/Zalera?oldid=2218477"
Community content is available under CC-BY-SA unless otherwise noted.