It is recommended to bring along Light Curtains or have the ability to cast Protect to reduce the damage it can do with its strong physical attacks, and also be able to absorb or nullify Fire-elemental attacks. Its tail attacks deal damage within an arc, so it's possible for some of the girls to avoid them if they're spread out.

Zalamander is immune to magic, but despite this, elemental items can harm him, so Fire Gems, Fish Scales, and Electro Marbles can chip away at his HP.

In the Fiend Tale endings, a notable Zalamander hates fighting. But in time, seeing his Drake brothers march off to battle, Zalamander becomes strong and decides to fight to protect his family. 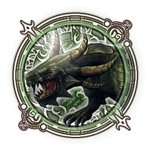