Zack starts as a SOLDIER 2nd Class and has the usual abilities expected of a SOLDIER member. Early in the game Zack is promoted to 1st Class. The player can use abilities via equipped Materia, and partake in minigames and QTEs with Zach, such as cutting down approaching projectiles with a sword, performing squats competitively, and using a sniper rifle to take out specific targets from afar.

The player can permanently boost Materia's stats through Materia Fusion. The Materia can be fused with various items that grant stat boosts and the boosts carry over to different Materia during fusion. The Materia can then be equipped to Zack. Zack also gains minor stat boosts himself by leveling up by defeating enemies and having the Digital Mind Wave roll 7-7-7 during modulating phase. The EXP counter is hidden, but defeating more enemies has Zack eventually toll 7-7-7 and level up.

Zack is a unique character in the Final Fantasy VII universe in that he can copy and adapt the Limit Breaks of other characters upon meeting them, and is thereafter able to perform those Limit Breaks as his own. The Crisis Core Complete Guide guide gives two examples of this: Zack adapting Healing Wave from Aerith's Healing Wind, and Meteor Shots from Cloud's Meteorain.[1] This is how Zack can copy the signature attacks of Sephiroth and Genesis (Octaslash and Apocalypse). Zack's own Limit Break is Chain Slash, a quick sequence of five sword attacks. The DMW can perform summons through Summon Mode and Chocobo Mode. The player can boost the chance of a desired DMW result with DMW Materia. 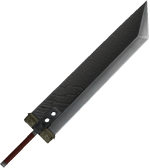 Zack wields four weapons, but they are not equipable equipment pieces. As a SOLDIER 2nd Class, and briefly after his promotion to 1st, he uses a SOLDIER sword, the traditional weapon of most SOLDIER members. Zack later inherits the Buster Sword and in Costa del Sol, Zack fights briefly with a parasol, swinging it around like a sword

. For gameplay purposes it functions just as well as a weapon as the Buster Sword. Later on, in the mission after Nibelheim, he uses a sniper rifle.

The higher in ranks Zack climbs, the more accessories he can equip. The accessories and Materia are the equipment pieces the player can use to customize him.

It is possible for the player to cause a fan club for Zack to spring up. Depending on the player's actions during the game, the club blossoms to over 100,000 members before disbanding several years after Zack's disappearance.