Born January 9, 1971 in Shimane, Japan, Yusuke Naora (直良 有祐, Naora Yūsuke?) was an art director, art supervisor, and character designer for Square Enix. He worked for the company from 1993 to 2016.[1]

Yusuke Naora appears as a Support Personnel of Akademeia. He shares the character model with Jack. 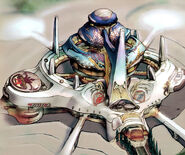 The kanji in the Shinra logo was drawn by Naora.[2]

The kanji in the Final Fantasy Type-0 logo was drawn by Naora.[2]