The city is alive with lights and fireworks, and the people wander the streets as if in a dream.
This is the third region of the game world, after Luxerion and the Dead Dunes. Only a short time remains before the world ends, but the city is alive with banquets and festivities, the people free to indulge their every desire. Snow the Patron rules over it all and maintains the peace.

Yusnaan, the City of Revelry is a location in Nova Chrysalia in Lightning Returns: Final Fantasy XIII. Described as the "city of pleasure", it is home to a number of attractions, including fireworks displays, an arena, a giant cactuar statue, and plays. Yusnaan is home to the lone fal'Cie that continues to provide the town's residents with resources. Snow Villiers is the city's Patron, and a l'Cie charged with protecting the fal'Cie. The people of Yusnaan know the end of the world is near, and seek to spend their final days partying.

Yusnaan
Standing opposite to Luxerion in all ways is Yusnaan, capital of hedonism and revelry, which draws pleasure-seekers looking to enjoy what little time remains to them.

In the area known was the Upper City, visitors can find the Champion's Quarter, home to the Slaughterhouse; the Glutton's Quarter, where many fine dishes are served; and the Augur's Quarter, where the rich gather to enjoy flights of fancy. The lower part of the city consists mostly of old warehouses an abandoned factories.

In the Patron's palace, great banquets and revelries are held each night. However, recently Snow does not show himself often. and security around the palace is tightening. Chaos infusions continue to spread throughout the palace, and some grumbling voices are even beginning to wonder if the Chaos hasn't overcome their great Patron at last.

The Palace of Yusnaan
The glittering city of Yusnaan is the one and only hub of production left in the world. Most industries fell to the encroaching Chaos and materials have become scarce and even impossible to attain. In this world, most of the food and goods needed for daily living are made of Pandaemonium, the last of the fal'Cie.

The goods made by the fal'Cie are shipped to the palace and then redistributed throughout Nova Chrysalia. The palace that plays host to the nightly banquets is also a vital link in humanity's last lifeline, and as the Patron, Snow bears the heavy responsibility of protecting it.

As revealed by Snow in Final Fantasy XIII: Reminiscence -tracer of memories-, while he and the rest of the declining humanity initially lived in the deteriorating man-made Cocoon, Bhunivelze, Yusnaan was created by the fal'Cie Pandaemonium after it built Luxerion. Making its home in Yusnaan, Pandaemonium established a supply chain of food and goods to lure people to abandon the man-made Cocoon, and Snow was among the first explorers on Nova Chrysalia. Snow took over the supply plant in Yusnaan and currently provides the world with food made of Chaos, though some people prefer to grow their own food. As the last fal'Cie of the world and Yusnaan's provider, it is under perpetual guard.

Snow became the Patron of Yusnaan by popular demand as the populace deemed him a fair divider of the scarce resources. According to his retelling of the events in Final Fantasy XIII: Reminiscence, Snow gained the title of Patron from the Order of Salvation, pretending to respect their authority to keep them from taking the city by force. In time, with his friends scattered to the winds and the regret of Serah's death heavy on his heart, the ongoing politics with Order sapped Snow of his energy. By the time Lightning awakes from crystal stasis, Snow is a shell of his former self with his l'Cie brand at its final stage, and seldom appears except during the nocturnal festivities. Snow made it law in Yusnaan the citizens are to live in perpetual celebration and revelry.

During the end-of-the-world celebrations a Chaos infusion erupts within Snow's palace, summoning Anubys monsters. Lightning arrives and fights Snow and afterward the two deal with the monsters. After Lumina brings down the ballroom chandelier and Snow halts it, he flees deeper into the palace with Lightning in hot pursuit. She is accosted by Lumina, who claims she is different from the usual servants of Bhunivelze since she can see inside the Chaos, then summons a Zaltys to block Lightning's path and disappears. After defeating the Zaltys, Lightning's path is blocked by a barrier of Chaos, and she flees from the approaching palace guards.

Lightning returns to Yusnaan determined to infiltrate the palace and free Snow from his pain. She tries to enter the palace via the Augur's Quarter, but lacks an ID and is refused entry. She contacts a man who can smuggle her inside and participates in a secret "tour" that leads her through Yusnaan's industrial area. She meets Lumina who says Yusnaan will soon be swallowed by Chaos, and says Snow no longer cares as he has been taken over by despair. Lumina summons a monster and Lightning defeats it, but its deathblow sends her falling to the district below. She finds an ID card and uses it to access Augur's Quarter, where she and Hope Estheim devise a plan to get her across the palace walls. Hope suggests they topple the Statue of God and Lightning convinces the director of the night's play, The Song of the Savior, to incorporate more fireworks into the show. Lightning helps gather the fireworks and convinces the director to let her star in the play.

Lightning plays her role and the statue falls allowing her to cross the palace walls. Inside she finds numerous Chaos infusions, and comes across a frozen door. Lightning finds Serah's engagement necklace from another room and uses it to dispel the ice from the sealed door and faces Snow. Snow plans to absorb the Chaos to save the city, and then have Lightning kill him in his Cie'th form. Though Lightning tries to talk him out of it, Snow steps into the Chaos infusion and begins to transform into a mindless Cie'th. After she subdues him, the half-transformed Snow remains unresponsive. Lumina appears and urges Lightning to kill him, saying it's what he has been waiting for, but Lightning pleads for Snow to return to his senses, saying Serah still needs him. Snow snaps out of his stupor and his transformation is reversed. His soul is saved and Lightning leaves him with a task to continue protecting Yusnaan until it is eventually destroyed along with the rest of Nova Chrysalia.

The arena where Lightning can battle with various monsters for different items.

A corridor called the Road to War connects the Coliseum Square to the Glutton's Quarter. Sazh Katzroy can be randomly found wandering the corridor after his quest for soul fragments in the Wildlands has been started, but not yet finished. If he appears in Yusnaan, he stays for one in-game hour.

Glutton's Quarter is a place full of market stalls and restaurants near the monorail station. A path leads to the Coliseum Square from here.

The monorail station that lies within the warehouse district.

The area with factories, workshops, and warehouses, where goods from around the world are brought in. Though not shown in person, the fal'Cie Pandaemonium resides in this area.

A playground for the privileged. 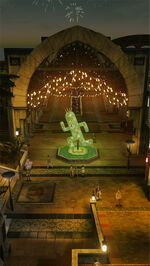 An area with Yusnaan's famous Cactuar statue that serves as a popular tourist attraction. 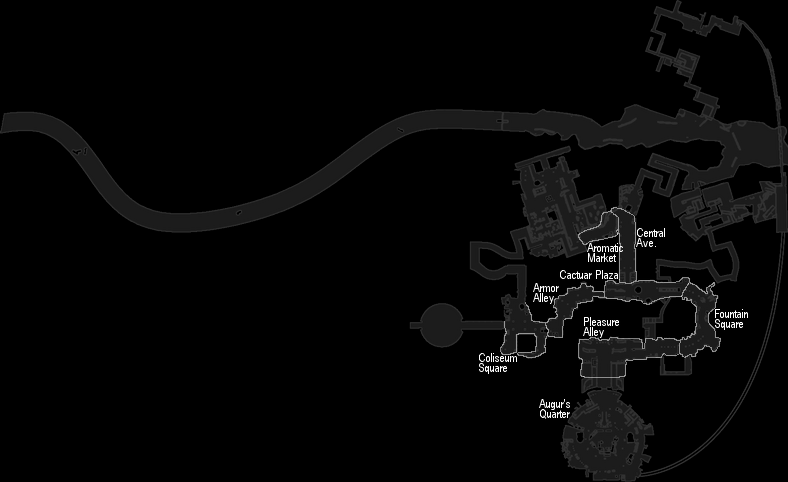 Forge (rare) is a traveling merchant who may randomly appear in various outposts to sell items that are not available elsewhere.

"The Glittering City of Yusnaan"

"Awaiting the Celebration" is Yusnaan's day theme. "The Glittering City of Yusnaan" plays in the afternoon. "City of Revelry" acts as the evening theme. "Ouroboros Festival" is the night theme. "The Coliseum ~Fearsome Warriors~" plays at the Slaughterhouse.

"Sneaking In" plays when Lightning talks with Hope about infiltrating Yusnaan Palace. "Chocobo Carnival" Plays at the Augur's Quarter in the mission when Lightning must talk to the director of the fireworks for the first time. The theme continues playing everyday after 0:30 as long as she hasn't talked to the director. "The Song of the Savior ~The Chosen One~" is the first part of the The Legend of the Savior stage show in Yusnaan. "The Song of the Savior ~Grand Finale~" is the second part.

Ballroom of the Grand Palace. 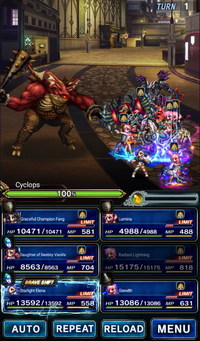 Yusnaan was inspired by a blend of Renaissance and Middle Eastern cultures,[2] as well as by the real-world location Las Vegas.[3] It is referred to as "the city that never sleeps" by the North Station attendant in Luxerion, alluding to other real-life cities such as New York. Yusnaan borrows elements from Serendipity and Nautilus, also "cities of pleasure" in their respective games.

Concept art of "Banquet of the Lord" logo.

The logo seen in the location trailer.

The Banquet of the Lord during the early morning, seen near the end of the "Avid Reader" quest.

Concept art of a street musician.