This dutiful lady warrior of the castle can always be relied upon to carry out orders.
Her sharp eyes rarely miss a trick, but sometimes she stresses too much over the small stuff.

The only way we will lose is if we try to do it alone.

Yunita is a playable character in Final Fantasy: The 4 Heroes of Light. She is the newest soldier for the Kingdom of Horne and is met in the Witch's Mansion. 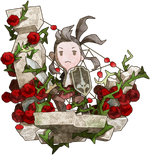 Yunita has long brown hair tied in a ponytail, with French braids on her temples and two locks of hair loose by her ears. She wears a breastplate over a red dress with a pleated skirt and tan trousers. She wears tall brown leather gauntlets and boots. While her artwork shows her with full torso armor (including on her arms), her character model only has a breastplate and pauldrons with a brown shirt underneath. Her gauntlets and boots are white rather than brown.

Her animal form is a brown-and-white rabbit.

When using crowns, Yunita's appearance changes according to which job she is using.

Befitting her role as a knight, Yunita is cordial, inexpressive and altruistic. Her seriousness and relative lack of a sense of humor stops the group from realizing the adverse effects their behavior has on her, though she is by no means negative, instead taking things as they come. She is devoted to her duties as a knight and to protecting her companions.

Although she is a good fighter and a loyal knight, Yunita lacks confidence. This is compounded by the other party members initially treating her poorly, with Aire berating her for being an inadequate bodyguard, while Brandt and Jusqua leave her behind in their travels. Yunita falls into despair and believes herself unworthy of joining the others. She is naive in areas outside of soldiery, allowing con artists to trick her.

Yunita remains loyal and holds to her determination to protect Aire and save Horne. Though she is nervous when it comes to her role in Brandt's group, she gains confidence through traveling on her own. Though she doubts her abilities, she remains determined to at least try and carry out her duties. Yunita can be overprotective, which can annoy the other party members, although she improves. She appears to have a crush on Krinjh, much to Brandt's irritation.

Yunita meets Brandt and Jusqua in the Witch's Mansion. She is the only soldier remaining from the squad sent to rescue Princess Aire, and is about to be defeated when the boys find her and help. Together they save Aire, who berates them, Yunita in particular, for failing to rescue her sooner. After the four defeat Louhi, the Crystal names them the Heroes of Light, granting them crowns, and entreating them to fight the darkness that threatens the world.

When they return to Horne, they find the population turned to stone. After going to the castle in search of King Horne, who has vanished, a representative from the Committee of Baneful Magicking offers to take them to Liberte. Yunita and Brandt decide to find a cure on their own and decline. When Jusqua chooses Liberte, Yunita tells him to bring Aire for her safety.

Yunita and Brandt head to Guera for its reputation for magic. The pair gets lost in the desert, but they meet Krinjh, who takes them to the Moonlight Tower for the Merkmal that will allow them to enter the kingdom. They meet with King Guera who offers to help them with the curse in exchange for defeating the Sand Devil, a monster that has kept the citizens trapped in town for years.

Yunita, Brandt, and Krinjh go to the Quicksand Castle and carry out the task. The Sand Devil reveals herself as Ariadne, Krinjh's former lover. Krinjh dies alongside her after telling Yunita and Brandt to seek a cure in Arbor. They return to town but are unable to meet with the king. Brandt abandons Yunita that night and makes for Arbor by himself.

Alone, Yunita travels to the merchant city of Urbeth, but the cutthroat townspeople con her out of everything down to the clothes on her back. Disheartened by Brandt's departure and her inability to save her home, Yunita becomes one of the vagrants wandering the square. Jusqua finds her after he arrives looking to lift a curse on a cat he believes is Aire. Though he is initially put off by her self-pity, he asks Yunita to join him just before the town is attacked by monsters, which had been sold as "protective puppets" by a sorcerer. They save the town, and Thauzand gives them a ship in thanks. Yunita and Jusqua agree to follow the sorcerer to Invidia, but Yunita is left behind at the inn again.

The floating island Spelvia crosses over over the town, and Yunita decides to go there and ask the legendary hero Rolan to help her save Horne. She trades a chunk of Mythril to Mylion for Rainbow Boots and climbs the Tower to the Sky to the Spelvia Dungeons where she is reunited with Aire. She agrees to be more of a friend than a bodyguard, while Aire apologizes for her earlier behavior. The two find Spelvia hostile. The golems attack humans on sight because Rolan hates human selfishness and greed. He rejects Yunita and Aire, but talking with the Witch of the Sky and Spelvia's goats reveals that Rolan has been infected with darkness. The pair ventures into his soul and meets an incarnation of Rolan's light, who joins them to try and save himself.

Together they defeat the monsters that were controlling Rolan, but in the process they release the darkness within him. Upon returning to Spelvia, Yunita and Aire are reunited with Brandt and Jusqua. The party goes to Rolan's chamber and fights him, but too late realize they have released darkness throughout the world, sending it back in time. Chaos is the one trying to flood the world in darkness and to stop this, the group has to to collect the legendary weapons of light. They resolve to fight together, having realized their mistakes and overcome their flaws.

Being sent back in time proves helpful to Yunita and the others, as they discover that the servants of Chaos had corrupted the different kingdoms. Using their knowledge of things to come, they defeat each demon. The rulers, in gratitude, grant them the weapons they need. They save Rolan this time and stop Satan, disguised as King Horne, from making the contract with Louhi preventing the curse that turned the villagers to stone.

Upon Satan's defeat, the Star Chamber opens and begins spreading darkness. Yunita and the others enter and defeat Chaos, which eradicates the power of darkness from the world. The party is sent to their own time, and their interference in the past means that much of the problems they encountered early in their journey no longer exist.

Yunita returns to Horne with the others and tells King Horne about Aire being a brave warrior. Aire doesn't want to stay in Horne and be a princess, but instead continue to protect the world as a Hero of Light. Yunita accompanies Aire and the others, aware of their destiny as the protectors of their world.

Yunita has the highest Spirit growth of the group and has fair Strength and Intellect. This can be beneficial for the White Mage and Sage crowns. Her Strength and Intellect stats are equal, which can be useful for both physical or magical damage-dealer, or for both with crowns such as Spell Fencer. The stat gap between characters isn't grand, so she can competently act on any crown without noticeable setbacks due to base stats.

Yunita appeared as a character in Bravely Default Praying Brage.[1]

The cover art featuring Yunita with Aire, Jusqua, and Brandt.

Yunita and the others fighting Greaps.

[view · edit · purge]Yunita is a unisex first name. People having the name Yunita appear to be originating from all over the world.