It is better for you to die in hope than to live in despair. Let me be your liberator.

Lady Yunalesca is a non-player character and antagonist from Final Fantasy X, who also briefly appears in Final Fantasy X-2. She was the first summoner to defeat Sin and bring forth the Calm.

Yunalesca has long silver hair that splays out around her in tendrils during battle. She wears a blue headband with four ribbons finished with blue beads and yellow tassels. The headdress has two long plumes that zigzag to make an 'M' shape. She has yellow eyes.

Yunalesca wears a blue-and-black bra with a curlicue design linked in front by a yellow chain, and a black thong, a thin yellow-tasseled belt, gold bracelets, blue armbands and wristbands, green sashes decorated with the Yevon symbols, silver anklets and a blue garter around her left thigh. She wears a blue bead necklace resembles seashells or fangs. She is barefooted.

Yunalesca is frank and to-the-point. While she can be kind, she can also be quite merciless, as she cares only about upholding the teachings of Yevon, not hesitating to strike down those who dare to question them. She is not open to the ideas of others, viewing Spira as doomed without the service that she provides.

Around the time her father Yu Yevon created Sin, Yunalesca and her husband Zaon were said to have escaped Zanarkand's destruction. Maechen speculates that motivated by her desire to protect Spira from Sin, Yunalesca provided a means to temporarily dispose of Sin in return for her father to be honored. According to the Final Fantasy X Ultimania Omega, however, the origins of the Temples and their connection with Yunalesca are hazy at best with no evidence Yunalesca had a direct hand in the Temples' formation and their doctrine. "Yunalesca's Real Story" in the Ultimania states that although Yunalesca's vanquishing of Sin with the Final Summoning was what gave rise to the Church of Yevon, she only learned of Yevon's teachings through the people visiting the Zanarkand Ruins seeking the Final Aeon, and played along because she wished for the people to follow them as the philosophy of the Temples and Yunalesca's own had a lot in common. In fact, without the teachings Yunalesca's ideals would not have become widespread.

Dying after using Zaon as the fayth of her Final Aeon, the unsent Yunalesca took residence in the Zanarkand Dome where she greets the summoners at the end of their pilgrimage and explains the fundamentals of the Final Summoning; a guardian who has a strong bond with their summoner must be sacrificed to create the fayth for the Final Summoning.

This tradition continued for a millennium. Summoner Braska's guardian, Auron, objected to such false hope but Braska's other guardian, Jecht, offered to become Braska's Final Aeon. After Braska's sacrifice Auron confronted Yunalesca who mortally wounded Auron while also leaving his right eye permanently scarred. He made it far enough to entrust Braska's daughter Yuna to Kimahri Ronso's care before passing away, becoming an unsent spurred on by the promises he'd made Jecht and Braska.

Ten years later, Yuna follows in her father's footsteps and becomes a summoner with the unsent Auron as one of her guardians. Auron seeks to avenge his comrades' deaths and though he wasn't strong enough to defeat Yunalesca alone, joining Yuna's pilgrimage with Jecht's son Tidus provides him a new opportunity at this feat. The group arrives to the Zanarkand Dome and Yuna renounces Yunalesca's ideals once learning the truth of the Final Summoning and Sin's continual rebirth. Though Yunalesca attempts to put Yuna and her guardians out of their "misery" now that they have learned the truth of Yevon and the Final Summoning and rejected it, she is defeated and finds herself fading. Yunalesca curses them for dooming Spira to the sorrow of Sin while lamenting to Zaon that the world's last hope is gone. Yuna sends her.

Two years later the New Yevon faction has collected many memory spheres made of pyreflies, each containing a small portion of the consciousness of the persons they depict. Unbeknownst to New Yevon, their leader, Trema, destroyed these spheres in Via Infinito, turning the dungeon into a place like the Farplane where the abundance of pyreflies may manifest the dead. Yunalesca and her husband, Zaon, manifest in Via Infinito, turning into fiends and attacking the Gullwings, who explore the dungeon.

In the International and HD Remaster versions, Yunalesca and Zaon are also briefly seen in the ending of the YAU-71's fiend tale.

The party fights Yunalesca in the Zanarkand Ruins. She has three forms, the last two of which often inflict Zombie status on the party.

The party fights Yunalesca in her fiend form Chac at the Via Infinito. 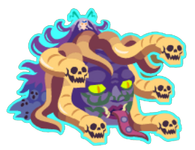 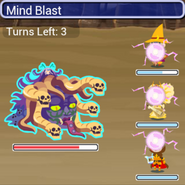 Yunalesca appears in the rare summon pool as a basic summoner and magic damage dealer.

Yunalesca appears as a boss in collaborative battles. 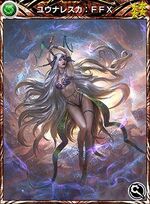 In Dissidia 012 Final Fantasy, one of Yuna's exclusive weapons is known as Yunalesca's Staff, which raises start Bravery by 34 points and Attack by 62.

Artwork of Yunalesca on the left of the Spiran map.

Yunalesca talks to the party.

Yunalesca about to transform.

The death of Yunalesca.

[view · edit · purge]Yuuna is the Okinawan word for Sea Hibiscus.