As the main protagonist of the Spira saga, Yuna represents it in over two dozen works from or licensed by Square Enix. She is seldom seen apart from Tidus and/or her signature summon Valefor. The following is a list of Yuna's appearances outside of Spira.

The garb worn by a summoner who brought the Eternal Calm to a faraway land called Spira.

Her Final Fantasy X-2 outfit with the Brotherhood sword, called Sphere Hunter also appears. She mimics Yuna's Warrior victory pose and the Final Fantasy X-2 victory fanfare plays when she wins a battle. Its locked ability is Crashing Waves Lv. ★. It can be obtained as DLC.

A concept CG render of Lightning wearing Yuna's outfit was shown during E3 2013 when Motomu Toriyama discussed various costume possibilities for her.

The Wind-up Yuna minion was an in-game reward for the attenders of Final Fantasy XIV Fan Festival 2017 in Frankfurt. Attenders can also choose between the High Summoner set or the Abes set.

Yuna appeared as a recruitable character. She was of the Visitor race and had Summoner and Gunner as her main jobs. Her attacks were Pray and Tiny Bee and her abilities were Summon Valefor and Trigger Happy.

Cloud: I couldn't finish 'em. Looks like this's gonna get complicated.
The following tables are incomplete for one or more reasons. If you wish, please examine the table and add anything missing. Remove this notice upon completion.
Yuna appears as a water-elemental summon and a character costume for players to obtain. She can be obtained through the summon drawing shop. Her Phantom Stone artwork reuses her promotional artwork () while performing the Sending, from Final Fantasy X.

Yuna's special attack is Magical Blessing, which restores half of the party's maximum MP. Summoning Yuna costs three points from the consumption gauge. In addition, Yuna teaches The Sending command ability for player's to use. The Yuna Phantom Stone is an SSS rank summon and has a summon cost of 20 to equip to a character.

Yuna allows the wielder to use the following abilities:

Yuna is a playable character and is one of the more seasoned Warriors of Cosmos, having fought in several cycles and recovered almost all her memories of home. Traveling alongside Jecht, Yuna runs across Tidus who has lost his memories and been summoned as a Warrior of Chaos by the Emperor to defeat Jecht.

Yuna pursues Tidus to try and awaken his memories of them, but the Emperor attacks her. Tidus intercepts the blow, and Yuna battles the Emperor. In the aftermath the two find Jecht and Tidus collapsed, and the Emperor spirits Jecht's body away while Tidus is taken to safety. Yuna later accompanies the surviving Warriors of Cosmos to the Lands of Discord where they sacrifice themselves sealing the portal the manikins are emerging from.

Yuna's first alternate outfit is based on Yoshitaka Amano's artwork of her, removing the floral pattern from her skirt and giving her a lighter color scheme. Her second alternate outfit is her bridal gown from her wedding to Seymour. Yuna's outfit available as downloadable content is her Gunner appearance from Final Fantasy X-2.

Yuna was added as a downloadable character as part of the season pass in November 2018.

Yuna appears as an obtainable character. She retains her original appearance. She serves as a character representative from Final Fantasy X, and is recruited while playing though the main story's Chapter III, after clearing "Dark Forest 3". She uses the Staff weapon type, and supports the party with White Magic abilities such as "Esuna", or "Cheer".

Yuna also has a alternate outfit, enabling her to wear her Gunner outfit from Final Fantasy X-2.

The daughter of High Summoner Braska, who defeated Sin ten years prior, Yuna chooses the path of the summoner to follow in her father's footsteps. She acts ever cheerful and bright in an effort to live up to the expectations of those around her. After meeting Tidus, a stranger who claims to have come from Zanarkand, she begins her own pilgrimage to find a way to defeat Sin.

Yuna appears as an unlockable character, and is obtained by collecting Turquoise Crystal Shards.

Yuna is a playable character, and is one of the few characters that have a second variation. Her first version is her Summoner garb from Final Fantasy X, unlocked by collecting Peach Crystal Shards. Her second version is the main representative of Final Fantasy X-2, donning her Gunner dressphere, and is available from the start by transferring save data from the second demo. If the player did not select her among their party of four, or download the demo, she can later be unlocked by collecting Indigo Crystal Shards.

Yuna appears as a playable character.

Daughter of High Summoner Braska who defeated Sin ten years earlier, she became a summoner with full knowledge of all it would entail. Though burdened with her mission and the serious expectations that go with it, she puts on a brave and cheerful face.

She was first introduced as an event ally during the coinciding events, Final Fantasy Special Event Parts 1 & 2 - Shattered World and Final Fantasy Special Event Parts 1 & 2 - Showdown, in which she was unlocked automatically as a bonus character. Leveling her up to 99 in these events and claiming an SSR ticket yielded her individualized SSR weapon, Yuna's Staff. In battle, Yuna is armed with her staff and uses the ability Heavenly Strike.

Beyond having a father who saved the world, this girl also blows a mean whistle.

Yuna is an exclusive character available from the Premium Character Shop as a random downloadable content. She summons Valefor during battle.

Yuna appears as an optional character. She could be recruited first via the Marriage of Convenience - Into the Bevelle Palace Challenge Event.

Yuna won the 2016 Final Fantasy Record Keeper Valentine's Day social media poll. Players received a Yuna's Obi (X) accessory and three Mythril stones for making her their Valentine sweetheart. Her picture, of her Sending at Kilika, was the game's title splash for the week of February 14–22, 2016. 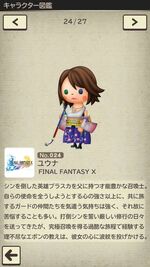 Yuna appears as a summonable vision and optional playable character. She retains her original appearance. She serves as a character representative from Final Fantasy X. 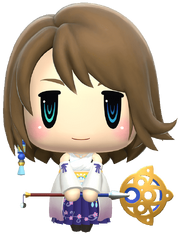 A summoner accompanied by Valefor. She accuses Reynn and Lann of bringing calamity to Grymoire. But why?

Yuna appears as a summonable Champion. She first encounters Reynn and Lann at the Pyreglow Forest after performing her Sending dance. Seeing them in their Jiant forms, Yuna mistakes the duo for Heralds and in her anger, summons a Mirage Valefor to battle them. After their battle, she comments on their use of Mirages and likens them to how Lusse Farna used them. She brings the twins to a monolith of Lusse Farna and explains to them the mythology of Grymoire passed down through the common people. Yuna suggests to the twins that they go to Saronia to look for the whereabouts of Exnine Castle and their mother, suggesting that they pass through Icicle Ridge and obtain Mirages with fire magic. After the twins leave, she is ambushed by the Plumed Knight but remains safe as she produced an illusion of herself.

Notes: Leader of Grymoire's few summoners / Mature and responsible for her age / Seems kind of tense / The pyreflies seen with her are not the ones you know

Leader Among Summoners
There are few alive today in Grymoire who have the power of the summoners, and even fewer actively practicing the art. Worried that their legacy may soon die out, Yuna resolved to take up the burden of preserving their techniques for future generations. It's stressful, but satisfying work.

Yuna is close with Rydia and Eiko. The two younger summmoners admire Yuna's maturity and look up to her as a kind of big sister. She tries to teach by example, but the strain of being "on" all the time was starting to get to her... That's when she met Tidus. Although she still hasn't realized it, he's quickly becoming the person she leans on when things get tough.

I'll Come Running
Anyone familiar with the original Yuna might remember a certain series of events during which she learned how to whistle. Lilikin or not, Grymoire or not, it's hard not to smile when watching these two having a nostalgic little exchange like this.

Developer's Note
We all really do love this gal. More than with any other character, we had people on the team complain fiercely that "Yuna would never do that!" during production. Still, the Grymoirian Yuna is the Grymoirian Yuna, and while we acknowledged everyone's objections, we did our best to create a new Yuna while still paying homage to the old. We hope you like her as much as ever!

Yuna is represented in numerous cards, most of the Aqua element (two being Promotional) and few of the Shine element.

She also appears in a card for Valefor.

Yuna appears in Kingdom Hearts II along with Paine and Rikku wearing her costume from Final Fantasy X-2. The Gullwings are diminutive in stature and depicted as pixies. They are allied with Maleficent and spy on Sora, but are not loyal to her and the Gullwings as a whole seem out of the loop and never know where Maleficent is.

After Donald mentions Leon has treasure, the Gullwings change sides and help Leon defend Hollow Bastion. They later confront Sora, Donald, and Goofy in their lie, but having been told of his battle with Organization XIII, they let it slide and give him the Gullwing Keychain for his Keyblade. During the ending, Yuna, Paine, and Rikku are at the Hollow Bastion hideout stealing Yuffie's sea salt ice cream and being chased around.

Yuna makes an appearance in Kingdom Hearts χ [chi] as one of the obtainable character cards. She appears in the remake, Kingdom Hearts Union χ[Cross], on several medals.

A Yuna-inspired card was released as part of the Final Fantasy Go There campaign.

Yuna and her staff appeared as part of the Final Fantasy collaboration. She was first introduced in the collaboration event that happened in the North American version from November 2, 2015 to November 15, 2015. Her ultimate evolution was introduced on May 16, 2016.

Yuna appears alongside Tidus as part of the 2018 Final Fantasy collaboration. Yuna is also available as a character by herself along with her signature aeon Valefor.