Yuna is a playable character in Final Fantasy X and Final Fantasy X-2. She is a Summoner and a White Mage, and the only party member able to call forth aeons and thus take part in duels against other summoners. Her stat growth determines her aeons' stats.

In Final Fantasy X-2 Yuna has abandoned her old life and become more of a physical fighter, being a Gunner by default but performing equally well in any dressphere. Her Special Dressphere is the Floral Fallal, her pet in Trainer is a dog and she is a moogle in the Mascot dressphere.

Yuna was taken to Besaid after losing her father ten years ago. There she grew up with Wakka and Lulu, choosing to follow in her father's footsteps and become a summoner. Being very honest and open, she can't keep a secret for long.

Yuna is a Summoner and White Mage. When using a counterattack, Yuna performs a regular attack on a ground-based fiend, and a forceful upper-left swing on flying fiends. When Yuna is low on HP she will slouch forward with her knees bent and hold her chest in pain. When she is at quarter HP left she will kneel on the ground. Her victory pose is to gasp as if surprised to win, then hold her staff in a horizontal position and bow.

Yuna's Strength, Defense and Accuracy are low, but she has high Magic, Magic Defense, Evasion, and Agility.

After completing her section of the Sphere Grid, Yuna can move into Rikku's section for a time, before moving into Lulu's. From there, Yuna will have access to Blk Magic, taking advantage of and further improving her already high Magic and MP.

Yuna is the only party member who can summon aeons, and the only one with abilities outside the Sphere Grid. When summoned, an aeon replaces the current party in battle and can be controlled, having special attacks and an Overdrive of its own. With the Summoner's Soul and Aeon's Soul key items the player can teach aeons new abilities and raise their stat attributes at the expense of various items.

Yuna's default position on the Sphere Grid runs near Rikku's and Tidus's, and her representing color is white. Yuna has no Skill nodes and one Special Ability node. The "Nul" spells and Pray are both quick to cast, and act on the whole party. Within the Lv. Locks of Yuna's grid area are the following Wht Magic nodes:

Abilities denoted with an asterisk (*) are available in the International, PAL, and HD Remaster versions of Final Fantasy X.

Auto-Life is through the Level 4 Lock, making it unattainable at the beginning of the game.

Yuna's Overdrive is Grand Summon, which summons an aeon with a full Overdrive gauge. After the Overdrive is executed the gauge will return to its previous state.

Yuna uses rods for weapons and rings for armor. 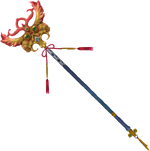 The Moon Crest is found in an alcove on a beach in Besaid, where Tidus meets Wakka at the beginning of the game. The chest is to the right of the beach and can be acquired immediately if the player wishes.

To obtain the Moon Sigil, players must travel to the Calm Lands and head for Remiem Temple where the player must defeat Belgemine's aeons. This requires the player to obtain Yojimbo and Anima, as Belgemine will not allow Yuna to challenge her Yojimbo or Anima until Yuna herself is able to summon them. Once the player has defeated to her Bahamut, Belgemine relinquishes the Flower Sceptre. The player must now capture at least one of every fiend on Mt. Gagazet for the Monster Arena. This will reward them with the Blossom Crown.

The Nirvana deals more damage the closer Yuna is to her max MP.

Upgrading the Nirvana with the Moon Crest will allow Valefor to break the damage limit. The Nirvana is arguably the easiest Celestial Weapon to fully upgrade, though players of the International or HD Remaster versions must obtain the Destruction Sphere treasures in Besaid and Macalania Temples on their first visit, should they wish to avoid facing Dark Valefor and Dark Shiva.

The following table lists the abilities the Nirvana will have after the appropriate upgrade is used.

A young lady once willing to throw all she had away to defeat Sin. But is the new Yuna prepared to do the same should she stand against Vegnagun?

For the properties and abilities conferred by Yuna's dresspheres in Final Fantasy X-2, see the links in the dresspheres gallery below.

Yuna has thirteen dresspheres, each acting as a job class with unique abilities. She has a different victory pose depending on her equipped dressphere.

In her Trainer dressphere, Yuna's pet is a dog called Kogoro that resembles aeon Yojimbo's dog. Yuna specializes in elemental and non-elemental magic, and healing and support as Mascot. Her Mascot dressphere is a moogle, and her special dressphere is Floral Fallal, where she dresses as a large purple flower reminiscent of the flowers on her skirt in Final Fantasy X.

The girls all have different EXP totals and therefore progress at different rates. Yuna tends to lag behind, so she has the slowest level growth, requiring 1,350,322 EXP to reach level 99 compared with 1,249,480 for Rikku and 1,169,767 for Paine. However, in the International/PAL/HD Remaster versions, players can help mitigate Yuna's slow progress by having captured fiends fight alongside her to help her catch up with or get ahead of Rikku and Paine.

Party members' stats are governed by the dresspheres they equip, and thus Yuna performs equally well in any dressphere; the only dresspheres with unique stats and abilities for Yuna are Trainer, Mascot and Floral Fallal.