Tetsuya Nomura
Yuna is a Warrior of Materia in Dissidia Final Fantasy NT and its arcade version, representing Final Fantasy X. She is a Marksman-type character, who is a summoner that summons Valefor to fight alongside her in battle.

Yuna's default player name is Nameless Summoner, and her manikin counterpart has been renamed Fleeting Summoner.

Yuna's default outfit is "Summoner's Dress", her original appearance in Final Fantasy X. The first alternate coloration of this costume recolors her kimono dress plum, her body sash and sleeves red, her boots brown, and her obidome white. The second alternate coloration retains her white sash and sleeves, but recolors her kimono dress a gradient of maroon to yellow, and her obidome black with a unique chequer pattern.

Her first alternate costume is "Wedding Gown", based on the outfit she wore for her wedding with Seymour Guado in Final Fantasy X, previously used in her appearance in Dissidia 012 Final Fantasy. The first alternate coloration recolors the dress with a pink hue, with several of her feathered ornaments recolored pink. The second alternate coloration recolors the dress with a blue hue, with her feathers recolored blue, purple and indigo.

Wedding Gown III.
Add a photo to this gallery

Yuna's Astral Rod.
Add a photo to this gallery

Type: Marksman - Yuna uses a vast array of magic spells, based on the aeons' Special Attacks, and can summon Valefor to aid her in battle.
EX Skil: Valefor - Abilities vary depending on Yuna's status: 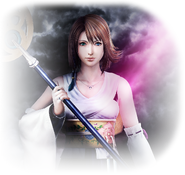 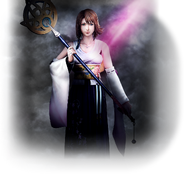 Victory animation.
Add a photo to this gallery