Yuna returns in Dissidia Final Fantasy NT as a Warrior of Materia.

Yuna's first alternate outfit, "Violet Hakama", is based on an artwork ( 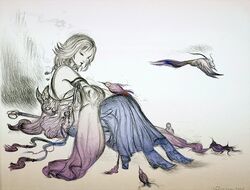 ) drawn by Yoshitaka Amano. Her summoner dress is a lighter lavender color without floral pattern and her hair has a lighter brunette shade.

Yuna's second alternate outfit, "Wedding Dress", is what she wore during her wedding to Seymour Guado ( 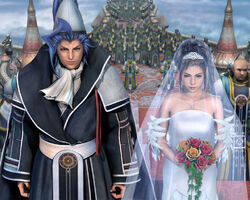 ): a white, strapless gown cut in the front to reveal her thighs with a trail behind her. The dress has white feather ornamentation on the front hem and a pair of small feathered wings attached to a bouquet of roses on the back. White gloves, a tiara, high-heeled white shoes with knee-length translucent socks and a silver necklace complete the ensemble.

Yuna equips rods. Most of her aeons no longer physically appear like in Dissidia 012 due to the reworked summon system; only Valefor fights alongside her in his full form.

Yuna's default player name is Nameless Summoner, and her manikin counterpart has been renamed Fleeting Summoner.

Yuna is a kind and the most mature of the new team. She is a selfless young woman who has gained her memories of her companion and friend, Tidus. The Emperor describes Yuna as a "seasoned one", aware she has been involved in the battles prior to the twelfth cycle. Yuna tries her best to help and protect her friends.

When Tidus and Jecht are about to duel, Yuna intervenes and tries to return Tidus's memories by staying by his side until he remembers her. The Emperor appears and attacks Yuna, but Tidus steps in and receives the blow instead. Yuna asks Jecht to watch over Tidus as she fights the Emperor. After the duel, the Emperor disappears with an unconscious Jecht who gave up his light to save his son leaving Yuna devastated. Laguna and Vaan appear and cheer Yuna up, and the three return to Cosmos and talk to Lightning and the Warrior of Light. After learning of Warrior and Kain's plan, they refuse to go along and vow to fight the manikins to the very end. Yuna leaves Tidus in Cosmos's care, leading to Cosmos resurrecting him as one of her warriors in the thirteenth cycle.

Confessions of the Creator

Yuna takes the lead in "Yuna's Quest 012: In Such A Place". Traveling with Lightning, the two are called back to Order's Sanctuary by Cosmos. Along the way they defeat Golbez and join up with Laguna, Kain, Tifa and Vaan, leading into the introductory sequence of Dissidia 012 Final Fantasy where the six are lost. In "Vaan's Quest 012: A Voice to Call Back", Vaan tells Yuna about his encounter with Tidus, who inquired about Jecht fighting for Cosmos. Vaan, unaware of Tidus's name, describes him as a sad boy his age, confusing Yuna about who it could be, as she remembers Tidus as cheerful and upbeat. Yuna also appears in "Lightning's Quest 012: One Can Fight Together", where she is concerned over Lightning spending time alone. After the two confront Exdeath, Lightning recalls some of her memories, and tells Yuna to call her "Light", grateful for her encouragement.

Yuna is described as a Grand Summoner and her attacks involve summoning aeons to fight for her: Valefor, Ifrit, Ixion, Shiva and Bahamut. Her attacks are powerful and when summoning, her aeons can act as temporary shields weakening (but not annulling) damage. Yuna's attacks are varied, which allow her to zone her opponents, which can be followed up with Assists. Her HP attacks have a long range, and can safely be used without placing Yuna at risk for counterattack. A downside to Yuna is that most of her attacks take time to execute, which can allow the opponent to counterattack due to Yuna remaining immobile. She lacks reliable ranged attacks, and most of her attacks require her to be close to the opponent, which can put her at a disadvantage with ranged opponents. 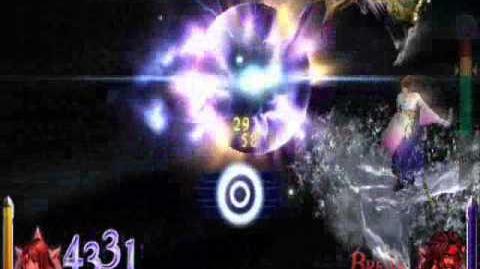 Yuna's EX Burst is To the Farplane, where each of her aeons performs its Overdrive, unique attack or both while Yuna Sends the opponent. The player has to enter button commands that appear on the screen as Yuna dances while on a sprout of water (similar to the Final Fantasy X sending in Kilika Port in that aspect), and the aeons attack the opponent from all directions. The player has to wait for the ring of light to appear around the command input and then press it just as it vanishes. After the sequence, Yuna ends the EX Burst by spinning and consuming the opponent in an explosion of pyreflies, with the last hit dealing HP damage.

Type: Marksman - Yuna uses a vast array of magic spells and can summon Valefor to aid her in battle.
EX Skil: Valefor - Abilities vary depending on Yuna's status:

Victory animation.
Add a photo to this gallery