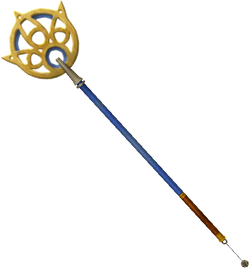 The staff that helped support a summoner on her long pilgrimage to the temples of Spira.

Yuna's Staff, also known as Staff and Summoner's Staff, is a recurring weapon in the Final Fantasy series. It is Yuna's trademark staff.

The design of the staff is based on the Khakkhara, a staff used by practitioners of Buddhism. The staff is used primarily for prayer, but also functions as a walking stick and a weapon if necessary. Khakkhara have rings around them of various numbers (most often six) designed to jingle as the holder walks, meant to frighten away small creatures so that the monk will not step on them, as well as alert people to the holder's presence.

Staff is Yuna's starting weapon and has one empty slot. It appears in all FMVs in which Yuna performs the sending. It also appears in the wedding scene regardless of which weapon Yuna has equipped.

When Yuna is equipped with the White Mage dressphere, she wields her iconic Staff.

The Summoner's Staff can be obtained as part of the "Spira's Summoner" downloadable content schema. In its basic form, it raises Lightning's Strength by 100 points and Magic by 330 points, but reduces Stagger Power by 25%. It can be bought from the main menu in the Rewards Barter Shop menu; first buy is free, but following will cost 200,000 gil.

Yuna wields her iconic Staff in cutscenes and battles.

Yuna wields her iconic Staff as her weapon of choice.

Yuna's Staff appeared in Puzzle & Dragons as part of the Final Fantasy collaboration. 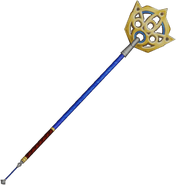 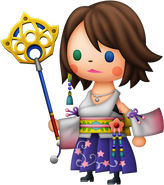