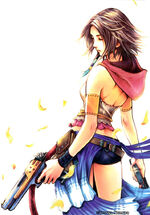 "Yuna's Ballad" is a theme associated with Yuna in Final Fantasy X-2. Unlike Yuna's character theme, "Yuna's Ballad" is an emotional and sorrowful leitmotif, most notably played during YRP's fight against Bahamut in the Bevelle Underground and moments where Yuna thinks about Tidus. It also plays during Gug's fiend tale ending.

With ephemeral warmth
I'll fill the gap between the two of us, and let my heart beat
I'm going to make this moment resonate
I can share this moment with you, so close your eyes

In the afternoon when I walk with you, I suddenly think for no reason
Maybe these days will eventually come to an end

Rather than listening to the voice of premonition
So we smile at each other, our palms overlapping, believing

With a small amount of warmth
I believe that the two of us are bound by the bond of life
I'm going to caress you, burn your love, and dye this moment

A world where everything is shifting
Even though my dream of wanting to stop time is gone
The moment I live with you now is not a dream...

"Yuna's Ballad" is the second song, arranged and performed by Hiroko Kokubu.