Final Fantasy Wiki
Register
Don't have an account?
Sign In
Advertisement
in: Races in the Crystal Chronicles series, Yuke
English

Playable tribe
Yukes are one of the four tribal groups from the Final Fantasy Crystal Chronicles series.

Yukes are tall and slender with vast knowledge. They wear suits of armor that conceal their faces. Like the Lilties, Yukes have a long lifespan. It is theorized that their armor serves their "body" and the Yukes are only souls that use a physical form to augment their magical abilities. In Final Fantasy Crystal Chronicles: Ring of Fates, Yuri tells an NPC that he has seen Alhanalem's face, but when asked what he looks like, Yuri and Chelinka fall silent and seem somewhat troubled, implying it is not something they wish to try to describe. Alhanalem and Meeth imply that removing a Yuke's mask and/or armor would result in a severe punishment if the Yuke does not have a strong relationship with the person removing them.

In Ring of Fates, Alhanalem mentions that no two Yukes ever have the same name. In Ring of Fates Yukes are identical in Multiplayer mode, but in Final Fantasy Crystal Chronicles: Echoes of Time, they have separate visual appearances and voices.

Yukes are the best magic casters. They are the slowest and weakest attackers, but cast spells quicker than the other three races, and start out with the highest Magic stat. When a Yuke defends they turn invisible, and become immune to damage and status afflictions for the command's duration. Yukes use mallets and hammers as weapons.

Yukes are rare, as the only place they appear in great numbers is Shella, their capital city, where the Yukes spend most of their time teaching others how to use magic. Yukes were the only race not defeated by the Lilties whose attempt to conquer the Yukes put the two races on bad terms; however, an NPC in Alfitaria notes that the two races are now seeing eye to eye.

Supplementary material refers to the male Yuke as Sibeag and the female Yuke as Ilias.[1]

In the original Final Fantasy Crystal Chronicles for the GameCube, male Yukes would "talk" by opening and closing their helmets. This trait has been since removed in the remaster, likely due to the more complex helmet of the new male Yuke design. This trait was never applied to NPC Yukes, making it a unique animation for player characters. In the remaster, the Submarine subclass includes a sturdy metal lattice in the abdomen showing that the Yuke does not have a physical form.

Yukes wield staves and have high Magic stats, gain greater elemental resistance as they level up, and their normal attacks are based on their Magic stats. Their Tribe Ability is "Magic Thread" that allows them to spread the effect of the magicite over a larger area using the touch screen to create a line from the magicite in the floor dragging its magic with the line. When a "Magic Needle" is nearby, players use the touch screen to draw a line from the needle to whatever element the needle is. This is usually used to solve puzzles. 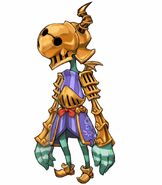 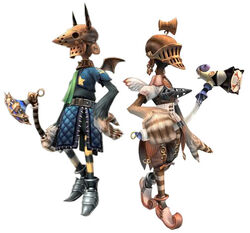 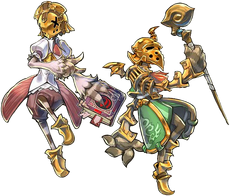 Yukes are one of the four tribes to play as. A magic-based tribe, Yukes are experts on the art of spell casting, able to cast Ultima and Meteorga independently. Although able to equip almost every weapon, they specialize in the use of books, bells, and brooms, though they can equip staves and can create orb-like projectiles while doing so. Yukes are the only race that cannot be customized by Artemicion.