Yuffie appeared as a support character. Her Unison Limit Break was Greased Lightning.

Yuffie makes a cameo as a tutor from the in-game manuals, explaining battlegen to the player alongside Red XIII. Yuffie is also the name of a Ghost Card; which is a Level 45 Cloud with the White Gem and Snowboard items equipped. The card can be won through Battlegen.

Yuffie is an obtainable character.

Yuffie is a DLC character.

She is a Speed and Treasure oriented character.

Yuffie is a playable character. Her initial weapon is the 4-Point Shuriken.

Yuffie is a playable character who could initially be recruited during the Challenge Event Hidden Resolve as the First Time Reward for completing the event's Wutai - Da-chao Statue stage in Part 1. She later appeared in A Brewing Nightmare and A Night to Remember.

Yuffie appears on wind-elemental cards, reflecting her use of throwing weapons in battle.

Yuffie appears on a Triple Triad card in the version playable via Final Fantasy Portal App. 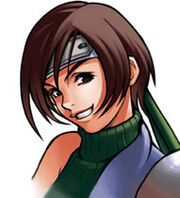 Yuffie is a secret playable character unlocked by finishing the game with Cloud. She primarily fights with punches and kicks, but can also perform several slash attacks with her shuriken and throw smaller shuriken for ranged attacks. She uses Sasuke's fighting style. Her alternate costume is a palette swap based on the early concept color scheme for Final Fantasy VII seen above.

Her fighting style is the same as Sasuke's, but based on Michelle Chang's fighting style known as Xing Yi Liu He Quan and Bajiquan based martial arts in Tekken 2, as she uses her basic attack combo mixed with her Limit Break, Greased Lightning. She can do a reverse somersault on her opponent as her special attack and slash thrice with her main weapon. She has her Limit Break, Blood Fest, with a minor change as she can slash her opponent with her main weapon three times. Her unique ability is identical to Sasuke's, who throws a glowing blue shuriken and a smoke bomb to his opponent. During charge, Yuffie can throw two shuriken, and glows pink.

In the Kingdom Hearts series, Yuffie appears as part of Squall Leonhart's party, who is now referring to himself as "Leon". She is accompanied by Aerith and Cid. She maintains her boastful personality, albeit toned down, and refers to herself as "The Great Ninja Yuffie".

In Kingdom Hearts, Yuffie's role was originally meant to be filled by Rikku from Final Fantasy X, but due to there already being a character called Riku, Yuffie was elected instead to avoid name confusion. Her outfit is based on the original design for Rikku, albeit in Yuffie's colors.

Originating from Hollow Bastion, the group fled to Traverse Town when Maleficent took over the castle. The three assist the game's main protagonist, Sora, in his adventures, helping him fend off the Heartless and giving him advice and information.

In the original Kingdom Hearts, a special gummi ship blueprint called Yuffie can be obtained by defeating 1500 Heartless and then talking to Geppetto in Traverse Town.

In the credits roll for Kingdom Hearts HD 1.5 ReMIX, 'Yuffie' is misspelled as 'Yufeie'.

This section in Dragon Quest & Final Fantasy in Itadaki Street Portable is empty or needs to be expanded. You can help the Final Fantasy Wiki by expanding it.
Final Fantasy VII characters
Final Fantasy VII G-Bike
Retrieved from "https://finalfantasy.fandom.com/wiki/Yuffie_Kisaragi/Other_appearances?oldid=3237264"
Community content is available under CC-BY-SA unless otherwise noted.