Yu Pagoda is a boss in Final Fantasy X appearing in the final battles with Braska's Final Aeon, Yuna's aeons, and Yu Yevon.

Enemy is Tough.
Initial HP starts at 5000.
Can only be temporarily disabled.
Revives the next time with an exact amount of HP the last time it got disabled.

The Yu Pagodas aren't strong and can't directly attack the party, but they use Power Wave to heal Braska's Final Aeon, remove Darkness, Poison, Silence, Slow, Zombie, and all four Breaks, and increase his Overdrive gauge.

When defeated, the Pagodas will revive automatically after a short time with increased max HP equal to the amount of excess damage from the finishing blow; for example, if they start off with 5,000 HP and are dealt two attacks worth 2,700 and 2,600 respectively, they will revive with 5,300 HP. If only one Pagoda is active, it will instead use Curse or Osmose on the party, with Pagoda A prioritizing the former and Pagoda B prioritizing the latter. Curse inflicts Curse, Poison, Sleep, Silence, and Darkness on a party member, while Osmose drains 100% of the target's MP.

During the battles with Yuna's aeons and Yu Yevon, Power Wave will function similarly, but instead removes Poison, Zombie, and Reflect. When paired with the Magus Sisters, they will use Power Wave on a sister whose Overdrive gauge is not full, or do nothing if all three sisters have their gauges filled. If Cindy has Reflect and is targeted by Power Wave, the status won't wear off until after she acts.

Because destroying the Yu Pagodas is a double-edged sword, and since the Yu Pagodas combined heal only 3,000 damage per turn (a well-grown party can deal more damage in one or two hits), it is generally for the best to leave the Pagodas alone and focus on the main enemies.

If one must attack them, it is easier to use physical attacks or Flare. If a party member has Doublecast and Flare, they can destroy both Yu Pagodas in a single turn. Break Damage Limit can work against the player when attacking the Pagodas, quickly giving them tens of thousands of HP.

During the first part of the battle with Braska's Final Aeon, inflicting him with Zombie will cause the next Power Wave to inflict 1,500 HP damage instead of healing for that much, but it will also remove the Zombie status. A good strategy is to use Slow or Delay on one of the Yu Pagodas so they can't use their dangerous Power Wave in succession, making it easier for the player to keep up. Should a Pagoda with Slow be defeated, the status will wear off. 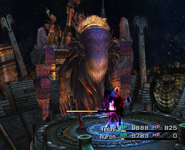 Yu Pagodas with possessed Anima.
Add a photo to this gallery

[view · edit · purge]A pagoda is a tiered tower with multiple eaves, built in traditions originating in historic East Asia or with respect to those traditions, common to Nepal, India, China, Japan, Korea, Vietnam, Burma, Sri Lanka and other parts of Asia.

Retrieved from "https://finalfantasy.fandom.com/wiki/Yu_Pagoda?oldid=3452562"
Community content is available under CC-BY-SA unless otherwise noted.