The acting imperial viceroy of Doma, Yotsuyu's grace and beauty belie a heart of stone. A cruel, sadistic ruler, she harbors a deep hatred for Domans. Under the pretext of purging radical elements, she has perpetrated numerous atrocities against her own people. Yet all are the hero of their own story...

Yotsuyu goe Brutus is a character in Final Fantasy XIV: Stormblood expansion, and serves as the tertiary antagonist. She is the acting imperial viceroy of Doma.

Born in the Naeuri family, Yotsuyu suffered a terrible childhood before her parents married her away to an abusive noble named Sashihai. She was sent to a pleasure house to settle her husband's debts after he died. She betrayed her people to serve as a Garlean spy for Zenos yae Galvus, and became acting viceroy of Doma by Zenos's decrees, counting on her hatred to remove all hope for the Domans. He was impressed with her bitterness and struggle with outrage in spite of traditions which limited her options to express it.

According to Chronicles of Light, the pair met while Yotsuyu was attempting to seduce Zenos for secrets on his father's battle plans. These she would turn over to the then-viceroy of Doma. Zenos was unreceptive and instead drew her out regarding her feelings on Doma, and repelled an assassination attempt in the brothel. Shortly thereafter Garlemald crushed the Doman resistance under Lord Kaien, and Yotsuyu joined with Zenos.

Yotsuyu uses her position to torment the Domans while denouncing the Confederacy of the Ruby Sea as a legitimate governing party. She announces that those who do business with them will be branded enemies of the empire.

With the recently demoted Grynewaht as her bodyguard, Yotsuyu holds court in the fishing village of Isari to satisfy her hatred on the grounds of weeding out traitors and undesirables. Gosetsu Everfall, watching her actions with the Warrior of Light, Lyse Hext, and Alisaie Leveilleur, turns himself in to stall for time as Yotsuyu interrogates him on the whereabouts of Doma's true heir, Hien Rijin. The Scions of the Seventh Dawn win over the Confederacy and drive the imperials out of Isari once they force the Red Kojin to abandon their imperial posts. Yotsuyu later has Grynewaht slaughter Red Kojin before taking the katana Ame no Habaki, which the Beastmen had among their treasures.

Yotsuyu presents the blade to Zenos when he comes to Doma Castle upon hearing of the Confederate attack. He tests the blade on the Warrior of Light and Yugiri Mistwalker when they attempt to assassinate him. Grabbing Yotsuyu by her hair, Zenos gives her a final chance to end the rebels before throwing her to the ground. After slapping Grynewaht when he attempts to help her up, Yotsuyu reveals the Warrior of Light's presence on Yanxia. She orders Grynewaht to kill the Warrior of Light's group while preparing a massive operation to purge all opposition in Doma.

The Doman Liberation Front refuses to accept defeat. Yotsuyu commands her forces to fight to the death and has the cyborg monster that Grynewaht became act out his last attempt of revenge as her last line of defense. After Grynewaht is defeated, Yotsuyu is cornered by Hien and his vassals. She explains why she sided with the empire and reveals she was buying time for her final gamble: have Doma Castle collapse on itself to take the prince with her. She is cut down when she attempts to shoot Hien, and tries to kill Gosetsu when he holds up the ceiling. Yotsuyu fails to stop Hien's group from escaping as she is seemingly crushed under the sinking castle. Carried by the current, Yotsuyu and Gosetsu survive and end up stranded on an island.

Yotsuyu attempting to kill Gosetsu and the others

In "The Legend Returns", when Gosetsu gets himself and Yotsuyu to Kugane via a makeshift raft, Yotsuyu suffers memory loss. She has become childlike, and Gosetsu refers to her as "Tsuyu". She obediently accompanies Gosetsu to find passage across the Ruby Sea to Doma to reunite with Hien, with the retainer concerned for her due to her past actions against the Doman people.

In "Under the Moonlight", Gosetsu remains bedridden and hospitalized by Tsuyu. He claims to be healthier and to be back in fighting condition soon. After wanting to taste the kaki fruit of Namai, his favorite food when he was a child, Tsuyu runs off to the village to search for it. Her memories have been gradually returning and she realizes they are actually something she did to the people of Doma. She kneels and bows down, apologizing to the villagers of Namai. Lord Hien asks the villagers to leave this matter to him and brings Tsuyu back.

During the meeting between Lord Hien and Asahi sas Brutus to confirm the negotiation on captives trading, Asahi brings out his parents who are Yotsuyu's stepparents, which has a critical effect on her amnesia. After Lord Hien's party returns to Kienkan, Tsuyu runs away and regains her memories. Thinking that she doesn't deserve Gosetsu's kindness, she tries to commit suicide. Her stepparents believe she still has no memories of the past, and discuss how they're going to sell Yotsuyu for money again. Yotsuyu murders them and returns with Asahi who admits he sent his parents to be killed by Yotsuyu.

After fleeing the conclave with her regained memory, she returns to Asahi's side, also to claim what he promised her in the previous night. The prisoner exchange is about to take place. The Warrior of Light, Hien, Alphinaud and the other fellows meet up with Asahi and his assistants in the Castrum to conclude their business. Hien notices a suspicious large quantity of boxes, with Asahi explaining it to be a gift of good will. Yotsuyu makes her presence known shortly after. She explains how she will resume the duties Zenos placed upon her and calls Doma a "putrid, pestilent swamp" which she will reign over until the whole population's mind has been broken by her vengeful crusade.

Orphan of the Naeuri, widow of Sashihai... ...And acting viceroy of Doma! You and your people are mine to govern; mine to punish!

To the shock of Hien's party, the "crates" reveal copious aether-infused crystals and Yotsuyu uncovers the moon-adorned Kojin relic (bestowed upon her by Asahi during his earlier visit). She becomes infused with the power of a primal, invoked from her own strong will and the crystal's energy. This was orchestrated by her own stepbrother who plotted it to bring up a reason to cancel the peace agreement and terms of the prisoner exchange. He flees, pursued by Hien and the other fellows, and leaves Yotsuyu to deal with the Warrior of Light.

She introduces herself now as Tsukuyomi—divinity of the night—intending to plunge everything of Doma into an endless darkness, with her shining as the sole cold moon above. The Warrior of Light and his companions are forced stop her, unleashing her in full fury. After overusing the primal's power she dissolves into dark mist and invokes what resembles the image of her horrendous memories and broken spirit. Her memories take form of her cruelest tormentors with an image of Zenos entering the scene to perform a coup-de-grace on her. Yotsuyu's fond memory of Gosetsu breaks through, shielding her from the attack, and helps drive off the remaining specters.

Believing she is beyond redemption, Tsukuyomi fights the adventurers before being defeated. Yotsuyu reverts to human form, barely alive and conscious. Asahi has returned and begins to shoot and kick the defenseless woman, revealing his resentment, as Zenos had favored her over him. Yotsuyu summons Tsukuyomi's katanas to skewer him, having saved the last of her strength just for that, and is satisfied at the very end.

Thank you, dear brother...for this precious gift. Vengeance. These people...our people...they ignore the corruption which festers beneath the surface. Cast aside that which is dirty and broken. Speak not of things which would disrupt their dreary little lives. Like you, Asahi...always pretending not to see. You were the first...the first I swore to kill. Ahhh...such bliss. I had thought my hunger insatiable...but now...now I am satisfied. You should feel honored, dear brother. I saved the last of my strength just...for you.

She looks at the Warrior of Light, claiming how the "Witch of Doma" is about to die and Gosetsu might mourn for the good "Tsuyu". She wonders if Gosetsu found the fruit gift to his liking, before dying peacefully. Lord Hien returns and a shocked Gosetsu mourns for Yotsuyu, asking why the kami had to save their lives just to inflict this pain and tragedy anew.

Yotsuyu is a Doman-Midlander Hyur with fair skin, pale yellow eyes, a beauty mark above the left side of her chin, and long dark hair with an ornate flower hairpin. She wears an elegant black collar with a pattern reminiscent of a spider's web, a black robe with red accents, and a gold obi. She is rarely seen without a smoking pipe.

Yotsuyu's grace and beauty belie a heart of stone and a will to survive by any means. A cruel, sadistic ruler, she scorns Domans due to her painful childhood and marriage to an abusive noble. Under the pretext of purging radical elements, and satisfying her personal arousal from seeing such inhumane acts on Domans carried out, Yotsuyu perpetrates numerous atrocities against her own people. Yotsuyu herself sees her hatred for Doma like an abyss, bottomless and insatiable.

Though loyal to the Garlean Empire, specifically Zenos yae Galvus, Yotsuyu is verbally abusive to her subordinates, Grynewaht pyr Arvina especially, to get them to obey her. She fears the Garlean prince, for she knows he does not tolerate failure and thus is desperate to stay upon his good graces.

Yotsuyu wasn't always hateful, but rather depressed and lonely, especially during her early childhood and young adult life. Her former master, when she was a courtesan, described her when her father sold her as "more doll than woman" and having "eyes that had given up on life." Her rage and hate surfaced when she was given the chance by the Garleans.

Following her memory loss after the encounter at Doma Castle, as "Tsuyu" she becomes more child-like and vulnerable, always at Gosetsu's side for safety. When confronted by the people whose lives she made miserable, she falls to her knees crying, apologizing, despite having forgotten her past transgressions. Yotsuyu's true goal was to make her family pay for the torment they made her endure, for she accepts that they made her the monster Doma fears and hates.

Yotsuyu is fought as a primal entity as Tsukuyomi within 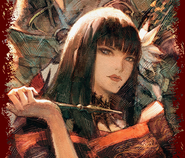 Yotsuyu in Under the Moonlight artwork.

Yotsuyu in the past.

There's a main scenario quest involving her, titled "Gone Like the Morning Dew".