Yoshitaka Amano (天野 喜孝, Amano Yoshitaka?), born March 26, 1952, is an artist who designed many characters in the Final Fantasy series, as well as for other series.

Amano's drawing process revolves around printmaking, with such techniques as carving wood and/or scoring copper plates, running ink, transferring ink to paper and lithography. Many of his works are influenced by ukiyo-e art, thus he typically colors his prints with acrylics to create a watercolor effect.

Amano has drawn most of the main characters of the Final Fantasy series to this day.

His artworks for Final Fantasy XII can also be found in the International Zodiac Job System Ultimania. Amano made the logos for all the main games in the series, as well as many of the spin-offs and sequels. His artwork, Big Bang, for Final Fantasy XV was used for promoting the game in the form of a 3D animation and a console theme, and is also found in the game itself as a skin for the player's car.

Amano considers his work for the Final Fantasy series as the thing that made him famous, and when he thinks about what's important to him as an artist, the pieces that he has worked on for Final Fantasy come back to him. He has described an "interesting book that puts together the modern art history of Japan" that had one of his personal art pieces with several familiar Final Fantasy characters and illustrations spread across the piece, as Final Fantasy is very important to his career, not just in name, but also in terms of the visual pieces and art expression.[1]

The games are in development when the logo requests are sent to Amano without much documentation to go by. Amano then interprets the information available and tries to incorporate it and create an illustration out of it. As the logo art is based around a central concept, not much of the important aspects would drift or change significantly even if the logo is created early in production. Because the title logo is monochrome Amano illustrates the logo as a standalone piece of art. Rather than receiving visuals, he creates the character illustrations from text-based information, like the age and the role they play. As he is not a character designer, but an illustrator, there are more instances where he has worked off text received from the development team. He has said that anything written in text builds and expands imagination, whereas visual assets to review or look at, would be "the end of it."[1]

After Amano has drawn the logo art the actual logo is designed around it by the design team that chooses the color for the logo, among other aspects. Square Enix likes to reflect colors from the logo art within the game's key art. For example, the green and blue of the Final Fantasy VII Meteor logo are also reflected in the Mako energy and Lifestream that play crucial roles in the game, and the tone of the key art.[2]

Promotional artwork of Kain and Golbez from Final Fantasy IV: The After Years. 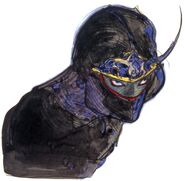 Artwork of Mog from the JAPAN artbook.

Promotional artwork of the character Tifa from Final Fantasy VII.

Promotional artwork of Squall and Rinoa from Final Fantasy VIII.

Promotional artwork of the cast of Final Fantasy XIII.

This is a list of artbooks of Yoshitaka Amano's works that feature Final Fantasy illustrations. Given release date are the original Japanese release dates; some have been translated into English and released at a later date.