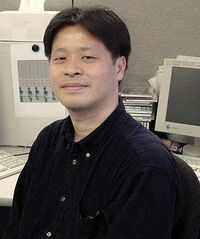 Kitase graduated in cinema at the Nihon University College of Art. In 1990, he was hired by Square, even though he didn't have any computer knowledge. His role was that of an "event scripter"; he would direct the characters' expressions and movements, the settings and the timing of music transitions, much like a stage director.

Hironobu Sakaguchi, creator of the Final Fantasy series, chose Kitase to be producer of the mainline Final Fantasy games developed by Product Development Division 1. Kitase chose Motomu Toriyama as his successor as director.

Yoshinori Kitase appears as a Support Personnel of Akademeia. He shares the character model with Machina Kunagiri. His code name is "Producer".