I am the blade of vengeance. They dare only whisper my name: Yojimbo.

Yojimbo is acquired by visiting the Cavern of the Stolen Fayth, where the player must hire him to become Yuna's aeon. Yojimbo acts as a sword-for-hire and has four different attacks depending on how much the player pays him, as well as a complex mathematical formula based on his worker-employer relationship with Yuna and several other factors. Yojimbo functions similarly to Odin and Gilgamesh from previous Final Fantasy games. His most powerful attack, Zanmato, instantly kills fiends and bosses.

Yojimbo is a colossal ornamental samurai wielding a katana, clad in colorful robes. He is accompanied by his dog, Daigoro. His fayth is bound by ribbons, which say "SEAL" in Yevon script. On his fayth statue his sword and shield say "Mea Culpa" in Spiran and Yevon scripts.

Yojimbo is a "lost" aeon, his fayth being held in the Cavern of the Stolen Fayth, presumably having been stolen away from a temple by those rebelling against the pilgrimage tradition. Some summoners and their guardians brave the fiend-infested cavern regardless to pray on his fayth and gain his allegiance. Yuna succeeds in this effort and Yojimbo joins her. If Tidus later returns to the fayth's chamber after learning the truth of Dream Zanarkand, Yojimbo's fayth assures him that he will never be forgotten.

Yojimbo can be recruited at the Cavern of the Stolen Fayth near the entrance to Mt. Gagazet.

Yojimbo will first ask Yuna a question regarding her purpose in trying to acquire his help. Her choice here will affect Yojimbo's behavior in battle and his probability in using his attacks. As for his payment, Yojimbo will initially ask the player for hundreds of thousands of gil, but it is possible to haggle with him.

When attempting to offer Yojimbo the least amount of gil at any stage other than the very first, he may reject a seemingly valid offer. This occurs if the player begins to input a new offer too quickly. Waiting approximately 5-8 seconds before beginning to enter the new offer will resolve this.

If the player pays Yojimbo triple what he is asking at any point, he will give two Teleport Spheres as a token of appreciation.

Obtaining Yojimbo in the Final Fantasy X HD Remaster version earns the It's All About The Money trophy/achievement.

With a wave of the summoner's staff, a night-time dimension forms, featuring a single sakura tree in bloom with blue flowers. A bark is heard, and Yojimbo's dog, Daigoro, appears to greet the summoner. Yojimbo emerges from behind the tree, turns with a sweep of his coat and calls upon his dog to start the battle.

His victory pose has him make a hand gesture and bow his head.

When dismissed, Yojimbo makes hand gestures, commanding his dog, Daigoro, to flee, and will disappear into dust and cherry blossom petals.

Yojimbo's stats are modest, with particularly high Evasion. He doesn't have any default abilities, nor can the player teach him any.

The player can increase Yojimbo's MP, though he cannot make use of it.

Yojimbo's only options on the field are Pay or Dismiss. He is not directly controlled and cannot use Shield or Boost. At the expense of paying him a sum of gil each turn (paying 0 will dismiss him), he will personally use these attacks at his discretion:

There are several factors that decide what attack Yojimbo will execute:

The resulting new motivation will trigger any of the following:

The same values are considered for the original Japanese and NTSC versions of the game, but there are no recalculations if the overall motivation is less than 80.

Occasionally, Yojimbo will select an attack on his own without needing to be paid, consuming his turn. The chance of this happening is CP/1024. With a compatibility parameter of 128, he will attack for free 13(12.5) percent of the time. At 255, it becomes 25(24.9) percent. The calculation made for his free attack is much simpler: CP divided by 4 plus a random factor from 0 to 63. If he attacks for free and his CP is 255, he is guaranteed to use either Wakizashi or Zanmato.

In short, paying Yojimbo sensibly while refraining from immediately dismissing him or allowing him to be KO'd are conducive to a strong relationship. His relation with Yuna can also be seen through the frequency of his attacks; sending Daigoro is a sign of poor standing, whereas using Wakizashi means one is on the right track.

Yojimbo can exceed maximum damage once Auron obtains and charges his Celestial Weapon, the Masamune.

Yojimbo is fought in the Cavern of the Stolen Fayth and at Remiem Temple. A possessed Yojimbo is also fought as part of the final battle.

In the International, PAL and HD Remaster versions, Dark Yojimbo can be fought in the Cavern of the Stolen Fayth after acquiring Yojimbo and re-entering the cave, reaching the end teleport pad and approaching the entrance again.

Yojimbo returns, now possessed by Shuyin. The Gullwings fight him to save some tourists visiting The Cavern of the Stolen Fayth in the Chapter 3 "Tourist Trap" mission.

"Yojimbo" appears as the final boss of the Kugane Castle dungeon, along with his dog Daigoro. During the fight, he berates his client Kageyama for not paying him enough gold when ordered to kill the Warrior of Light's party. He uses his Zanmato attack several times in the fight, doing more damage to the party based on how much money Daigoro manages to retrieve from the arena. In order to reduce the damage taken from Zanmato, the players can retrieve the coins first. Once his HP runs out, rather than being defeated, Yojimbo simply decides that he's earned his pay and promptly leaves the area.

He later appears in the Even Further Hildibrand Adventures quest line where he is hired to protect a priceless sword, the Soboro Sukehiro, from the thief known as the Wolf Burglar. His role is somewhat more comedic in this story, matching the tone of the Hildibrand quests. At the finale of Hildibrand story arc in Stormblood, he reveals himself to be Gilgamesh in disguise, even during the Kugane Castle events.

As of patch 5.1, he starts working at the Gold Saucer for the GATE event, the Slice is Right.

Yojimbo appeared as a recruitable character. 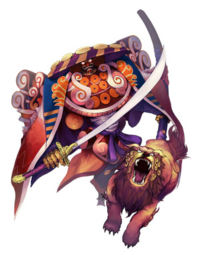 Yojimbo appears as a fire-elemental summon. Two versions of Yojimbo are available as signets to equip; Wrieg's version, which teaches Mineuchi abilities, and a stronger version available to Parai, which teaches him Triple Wakizashi Slash abilities. Yojimbo's special attack is Zanmato, which deals moderate fire-elemental damage to all enemies and has a chance to inflict stun.

In the original free-to-play versions, both signets could only be obtained through the summon draw shop.

Whilst not physically appearing Yuna can summon Yojimbo's Glyph to use Wakizashi. 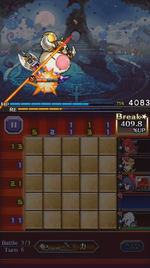 Yojimbo and the untargetable Daigoro have appeared together as an advanced boss. He uses his familiar moves from Final Fantasy X. Appearing in Destiny's Path, his defeat was required to obtain Yuna's Memory Crystal II as a First Time Reward. If Lulu is in the fighting party, her exchange with Lady Ginnem will be reenacted at the start of battle.

A mercenary swordsman. His dog, Daigoro, never leaves his side.

Yojimbo appears as a fire-based ability card, with artwork by Takayuki Futami. 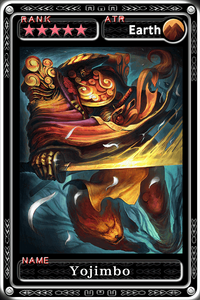 Soul of the fayth concealed beneath a ravine, this aeon strikes and slashes in service of he who has the most gil.

Yojimbo is likely inspired by Ogami Ittō, protagonist of the manga Lone Wolf and Cub; a samurai turned killer for hire who travels the countryside with his son, Daigoro.

Although obtaining Yojimbo as one of Yuna's aeons is optional in gameplay terms, it's implied his acquisition is canon. Despite not explicitly being shown in the final FMV like Anima and the five primary aeons, a small being with a red hue appears towards the left before the aeons dissipate. It's unlikely that this is Anima, who dwarfs the other aeons, or the Magus Sisters, whose presence would've forced Yojimbo's acquisition anyway.

Because Yojimbo cannot learn any other abilities, the latter half of his ability animation isn't normally seen, as his abilities have unique animations.

A figure of Yojimbo was made for the Final Fantasy X Action Figure Collection by ArtFX. Listed as No.2 in the series, the Yojimbo figure comes complete with Zanmato and Wakizashi swords, Kozuka throwing knife and Daigoro, as well as a mountable stand for display. A later version of "Dark Aeon Yojimbo" was released using the same figure mold and accessories, as Final Fantasy X-2 merchandise.

A figure of Yojimbo was also made for the Final Fantasy Master Creatures second set, featuring him slashing with Zanmato as Daigoro is pouncing. 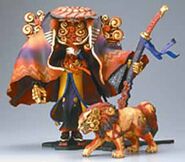 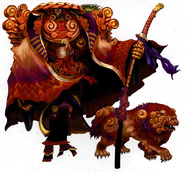 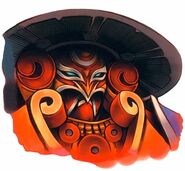 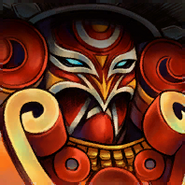 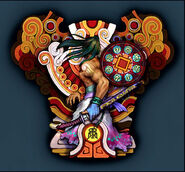 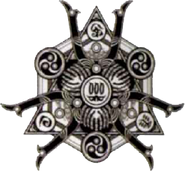 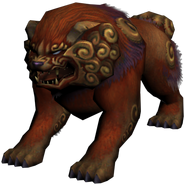 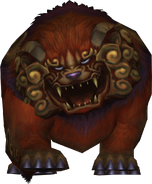 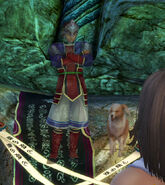 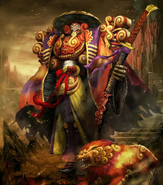 When Yuna visits Yojimbo's fayth to hire him as an aeon, he calls himself Yojimbo. Despite this, the player can still rename him.

In the Japanese version, Yojimbo's name is written in kanji as "用心棒" in the subtitle of every conversation, while in the battle scenes, and in the aeon menu, it written in hiragana as "ようじんぼう".

Yojimbo is depicted as a samurai. [view · edit · purge]Samurai were the military nobility of medieval and early-modern Japan. They were not just great swordsmen, but also powerful horse archers and martial artists of other fields. Though their status was that above commoners, samurai were bound to forms of etiquette and a way of life known as Bushido, stressing honor to one's devoted and preparing oneself in the face of death.