A born mercenary that never does anything for free. His ability "Zanmato" only *sometimes* causes instant death, but it is still highly effective. When a man uses six swords at once, you know he means business.

Yojimbo is an enemy in World of Final Fantasy Maxima.

Bloom in the Moonlight 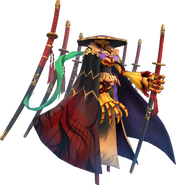 Wallpaper for World of Final Fantasy Maxima from official websites.

[view · edit · purge]Yōjinbō (用心棒?) means "bodyguard" in Japanese. One of the most notable fictional uses of the yojimbo is the 1961 period drama film directed by Akira Kurosawa. It is the story of a ronin, a wandering lordless samurai, who arrives at a village beset by two rival crime lords in the Edo period of Japanese history.