Songs tell of a great warrior in a faraway land who once wielded this weapon.

The Yoichi Bow (与一の弓, Yoichi no Yumi?), also known as Yoichi's Bow, Yoichinoyumi, and Samurai, is a recurring bow in the Final Fantasy series. In the early installments it appeared as the most powerful bow, but it has been surpassed by other bows in the most recent games.

A legendary bow of unparalleled power.

The Yoichi's Bow is the second-most powerful bow and can drop from Black Knights. It casts Berserk on the party when used as an item.

The Yoichi Bow is a powerful bow that can be bought in Falgabard for 42,000 gil. It gives a bonus of 5 to Agility and has 70 Attack.

Bow once used by a famous marksman.

In the 2D versions, Yoichi Bow (Samurai in the SNES version) is a powerful bow found in the Feymarch that grants a bonus of 10 to Strength. In the 3D version, the Yoichi Bow resembles a traditional samurai bow, while the corresponding arrows appear to be made out of bamboo.

In the Easy Type version, Yoichi Bow's hit rate was increased to 70%.

Yoichi Bow can be equipped by Cecil, Rydia, Rosa, Palom, Porom, and Cid. It can be found in the Cave of Eblan with an attack power of 33 and a accuracy of 10.

The Yoichi Bow provides 60 Attack, 25% Accuracy, and +10 Strength. It can be equipped by Cecil, Ceodore, Cid, Rosa, Rydia, Palom, Porom, Edward, Luca, Leonora, Izayoi, and Harley. It can be found in the Subterrane after defeating the CPU.

Bow once used by a famous marksman. Must be used two-handed. Full power from back row.

The Yoichinoyumi is a Relic Weapon of the Ranger and Samurai jobs, available to level 75 Rangers and Samurai after having completed an immensely lengthy and expensive quest (often taking months of time, hundreds of millions of gil, and the full assistance of an entire Linkshell community to obtain difficult Dynamis drop items).

For Rangers, it is widely recognized among the endgame community as one of the most powerful weapons, though the Samurai class does not benefit in the same respect. It has the highest base damage rating of all bows present.

In the original version, the Yoichi Bow is the fourth-strongest bow, and can be bought for 12,500 gil at Balfonheim Port. It can also be obtained from the White Mousse Hunt and by doing the great cockatrice escape sidequest in Eruyt Village. It has the Attack power of 75 and requires unlocking of the Bows 5 license for 45 LP. Bows are among the slowest weapons.

In the Zodiac versions, Yoichi Bow now provides 89 Attack, 36 CT, 5% critical rate, and requires the Bows 6 license for 70 LP. It can be bought in Balfonheim Port for 15,800 gil, found as a treasure in Ridorana Cataract (Colosseum), and from the cockatrice escape sidequest. It can be equipped by the Archer.

The Yoichi Bow is the Zodiac Weapon for

Bards. It is acquired via the quest

His Dark Materia, by combining reagents acquired from assorted other side quests with a materia created from Artemis Bow Nexus, the final stage of the bard's Relic Weapon. The Yoichi Bow can then be upgraded to Yoichi Bow Zeta, the most powerful bard weapon in A Realm Reborn.

The Yoichi Bow's and Yoichi Bow Zeta's secondary stats are determined by what the player chose to imbue in their Artemis Bow Novus, and can be redone by acquiring and imbuing a new Sphere Scroll: Artemis Bow from Hubairtin in Central Thanalan and presenting it to Jalzahn Daemir in the North Shroud.

The bow of a legendary archer. Its unusual size gives it incredible power.

The Yoichi Bow is the third-most powerful bow and can be obtained by equipping the Treasure Hunter ability to retrieve it from the third floor of the Midlight's Deep, winning in Rendezvous and selecting from the trophies randomly, and stealing from the archer during the battle in Orbonne Monastery Underground Library B4.

Songs have been sung about this bow from afar.

The Yoichi Bow is an high-rank bow that teaches the Take Aim ability to Archers and provides +33 Attack and a Range of 5. It is obtained as a random reward for completing a mission and as a reward for reaching Track level 5.

The Yoichi Bow provides a Range of 5 and +33 Attack. It can be purchased for 5,200 gil after selling an Aged Turtle Shell, Spiral Vine, and Quince at the bazaar.

Samurai has a bow icon before its name. It can be found in Edo Castle and Nasty Dungeon. It has 30 uses, it also increases a Robot's HP by 117 and increases their Agl by 26. The damage formula for Samurai is equal to 1000 points of damage. The bow is Long Range, attacks one group, and never misses.

Samurai has a bow icon before its name. It has an Attack power of 170 and it can be forge by Masa on the Talon.

Yoichi's Bow is Trey's secret weapon obtained for defeating True Gilgamesh in a secret area on the third playthrough. Though the weapon does not change the model of the bow Trey wields, the model on Gilgamesh makes it out to be a large bow fashioned in a Japanese instrument motif, with two taiko drum centerpieces on each of the limbs with flaring ribbed fins, three crossing bow strings held into place with shamisen headstocks and machine heads, and a finish of black lacquer and gold filigree. It gives 69 Attack points and has a 10% chance to instantly defeat enemies. In the PSP version, it can also be obtained by exchanging 15 tickets on the Square Enix Members site.

Weapon of a famous foreign bowman. It demands exceptional strength and an unclouded spirit.

The Yoichi's Bow is one of the most powerful bows, providing +132 to Attack. It can be made using the Foreign Weapon scroll, and bought for 3,350 gil.

Weapon of a famous foreign bowman. It demands strength and an unclouded spirit.

This odd bow comes from a far land and bears the name of some person or another.

Yoichi's Bow grants +15 to Attack. It can be equipped by Ranger.

A highly effective bow from a faraway world. Simple and lightweight, women are able to use it with ease. In its world of origin, it is said to have been used by a rebel soldier who, after an attack by the Palamecian Empire, lost her parents and became separated from her brother.

Yoichi's Bow is a Bow obtained as the Super Trust Mastery Reward from Thoughtful Sister Maria. It provides 126 ATK, 148 SPR, +70% Accuracy, has a damage range of 125-175%, requires both hands to wield, and increases physical and magic damage against avians by 50%.

An asymmetrical bow said to have been used by the famous archer Yoichi from the land of Wa, an island nation that vanish several centuries ago. It delivers a high Critical Rate and overwhelming Attack, but it is said to take considerable time before it can be mastered.

In Bravely Default, Yoichi's Bow provides 76 P.ATK, 95 Aim, and 20 Critical. It can be found in the Twilight Ruins (blue chest) and Dimension's Hasp.

In Bravely Second: End Layer, Yoichi's Bow provides 81 P.ATK, 95 Aim, and deals 50% more damage to the undead. It can be found in the Harena Ruins (blue chest). 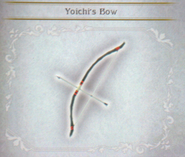 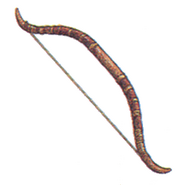 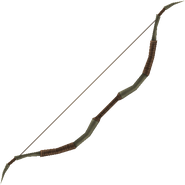 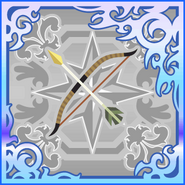 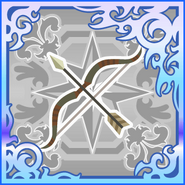 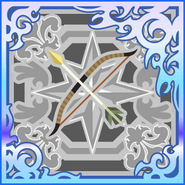 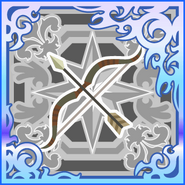 [view · edit · purge]Nasu no Yoichi was a samurai archer of feudal Japan. According to the Heike Monogatari, a literary epic of feudal Japan, a ship in the enemy fleet placed a fan on the mast of their ship, proclaiming it would deflect all arrows fired at them. Nasu no Yoichi, horseback among the waves with his target also rocking back and forth, shot the fan off with a single arrow.